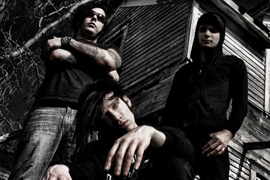 Margin of Error – “Your Life In Playback” [Free Download]

The Skinny: Hailing from Cleveland, OH, Margin of Error was conceived in 2005 by frontman Travis Meyers. The band has evolved from an Industrial Metal sound on their 2008 infectious debut, Destroy.Create.Repeat., to a unique blend of progressive deathcore fused with the darkest of electronic elements, reaching deeper down to hell than other bands would dare try. In 2009, Margin of Error released the controversial full length, What You Are About to Witness, taking a bold step forward and testing the limits of how apocalyptic and brutal a sound can get.

What You Are About to Witness is a concept record based on the thought process of a serial killer. In this mind set, Meyers explores the killer’s cold and calculated assault on humanity. With this inspiration, the record became the soundtrack to human suffering. What You Are About To Witness is filled with menacing riffs and crushing breakdowns, but never strays away from strong song structures, memorable choruses, and such a dark mood within. The lyrics read as the serial killer’s diary from the thoughts before and after the killings to the blood-drenched scenes themselves. Shrieking vocals rip human flesh to shreds and are perfectly cradled in the brutality, and the frantic mood swings from evil to insanity puts an undivided amount of terror and suspense to the Margin of Error trend. Margin of Error has delivered a menacing and murderous masterpiece with their latest work.

You could call Margin of Error the chosen one to bring a certain level of intensity back to the game – they’ve been doing everything right a hard working DIY band should, and have been to hell and back. With no remorse, Margin of Error is that new breed of deathcore and brutal music in general you need to follow.