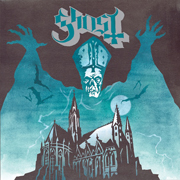 Prior to listening to Ghost’s album Opus Eponymous, I read the press release that used the words “beautiful,” “satanic” and “pop” in the same sentence. And naturally, I was highly skeptical. But somehow, those words are pretty spot on.

A reasonably short record, Opus Eponymous only has nine tracks, but every one is decent and deserves its place on the track listing. The organ introduction is a prepossessing and oddly ominous start which leads into track two, “Con Clavi Con Dio,” which builds up into the harmonious cry of “Lucifer! We are here!”

“Ritual,” like most of the album, is a decided throwback to 1970s heavy metal, but Ghost cleverly manage to make it sound fresh rather than stale. “Elizabeth” and “Stand By Him” both display Ghost’s ability to work haunting melodies with complimentary pop harmonies, which works well with the lyrical guitar tunes that seem to sing along with the vocals like some kind of subtly satanic choir.

They close with “Genesis,” which, as a purely instrumental track is quite daring as a closer, but it works. Its driving rhythm is akin to the steadiness of galloping horses, and as it tapers off into a slow and thoughtful acoustic guitar ending, evokes imagery of a troop of post-apocalypic knights charging through a forest to rest at the top of a mountain, surveying the destruction of the world below.

The six apparently nameless members of Ghost play beneath cloaks and painted faces, their intention evidently to “communicate a message of pure evil.” It’s hard to tell if they’re totally serious or just making fun, in which case they’re either completely deranged or completely brilliant. I honestly can’t decide which.  [ END ]