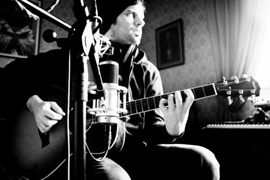 The Skinny: In the attic of his grandfather’s house, boxes with books were piling up. Rummaging in those boxes, young Nicolas Chapel found “Demian” by Hermann Hesse. “I was six or seven at the time”, the French allrounder remembers. “The character of Max Demian was fascinating to me, expressing his thoughts freely in a way I was not able to express myself at the time. When searching for a name for my music, I wanted to name the songs, they are my little “Demians”, Chapel explains. “They help me understanding my place in the world”.

On the highly praised debut Building An Empire (2008), all “Demians” stem from the brains of Nicolas Chapel, who played all the instruments himself and produced the record in his own bedroom. The album received a surprisingly positive echo in the press and among his fellow musicians. After creating a real live band with Gaël Hallier on the drums and Antoine Pohu playing bass guitar, Chapel went on tour throughout Europe multiple times, including tours with Marillion, Anathema and Porcupine Tree.

It’s in Normandy, north western France, that he found the perfect place for creating at peace, in a house near the sea. Locking himself up, Chapel once again recorded the album by himself. “This time I wanted to get my own sound. I chose only real instruments, there are no samples on Mute. I played the cello, double bass, violin, drums, mellotron and piano. With real instruments the record has more character. I was not afraid of trying things that were new to me.”