Welcome to Jake Pilewski’s musical adventure. Indifferent to genres and trends, Jake is exploring a more intimate aspect of his musical personality with A Stone Unturned, the latest record from his band Jake & The Venom. You can get a sense of what we’re alluding to, with “Brief,” the latest single from the album, which saw its official release on July 23rd and we’re now offering as a free high-quality MP3 download. The song is a more pensive number for the band, showing a more soulful, unguarded side to Jake as a songwriter.

A Stone Unturned is the product of a very productive period of writing and recording for Jake & The Venom, with the EP being the first in a three-part series of releases, with its two follow-ups due to be issued before the end of 2021. Along with the release of “Brief,” the band also recently shot a very scenic music video to accompany the single’s release, which you can view below.

When asked about “Brief” and his new series of EPs, Pilewski was rather philosophical in his comments. “I’ve always been an advocate for critical thinking,” he said. “I believe that concept alone would solve a huge portion of the world’s problems. On a personal level, on a focused level (friends, family), and naturally on a societal level. Finding objectivity in ourselves allows for better, more meaningful conversation that opens up opportunities of understanding through sympathy, empathy… that whole process becomes knowledge that is sure-fire wisdom.

“The song ‘Brief’ is both a prologue and epilogue of what’s to come on this three-part release. Four songs at a time over a four to five-month period. We start exactly where we end as creatures of habit. But hopefully, where we end, even though it feels familiar, hopefully we find ourselves in the same place with a completely different outlook. Hopefully, all these endless circles we find ourselves in, I hope we take time to learn along the way. And no matter what struggle we find ourselves in, in hindsight, we always look back and acknowledge that though it may have been taxing or it may have been rough, it was brief.”

There’s a certain southern, midwestern flavour to the band’s sound, born out of Jake’s upbringing in Toledo, Ohio. He’s something of a local legend in his native city, well regarded for his passionate performances and workmanlike approach to his craft. He formed Jake & The Venom in 2016 when he began recording a set of songs that he had written over the course of the previous 14 or so years. While he plays with others onstage in a live setting, from a writing and recording standpoint, Jake & The Venom is predominantly a solo project. He writes, producers and performs almost everything on his own, balancing elements of folk, country, alternative, and ambient music.

After playing in many bands that he didn’t feel equaled his level of desire and ambition, Jake took the bull by the horns and is now making music that is undeniably his own, comfort in his element, and his ability to be his own musical boss. 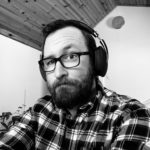 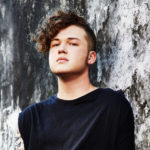