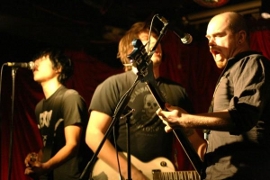 The Skinny: Taking the Toronto punk rock scene subtly by storm, Permanent Bastards are definitely worth a listen. You may have heard them on 102.1 The Edge in Toronto and CHYZ 94.3 in Montreal or saw them share the stage with acts such as Fake Problems, Tim Barry, Ill Scarlet, Time Again, The Flatliners, Saint Alvia Cartel, Hostage Life, The Loved Ones, The Artist Life, and Billy the Kid… amazingly all within their first year as a band.

It’s not too often that a punk rock band comes along that has a sound fit for rock radio and Permanent Bastards are just that. The music they play will appeal to rockers who aren’t even remotely into the punk scene, yet somehow still manage to stay true to their obvious Punk roots. PB comes off as your regular down-tempo punk band but keeps you hooked no matter what mood you’re in. Let’s put it this way, my friends like them and my mom likes them.

They recently dropped their new album Emericans and are touring around Ontario in support of it. This release should definitely be on your shelf as soon as possible. Permanent Bastards’ music is popping up everywhere including snowboard videos such as Bro-Sesh 2.4 and Snowboard Realms which are both available on YouTube free of charge. It won’t be long before these guys are playing sold out tours in 800+ capacity venues, and from there, who knows? In any case, if you like punk rock you should check these guys out so you can say you liked them BEFORE they hit the big time!  [ END ]