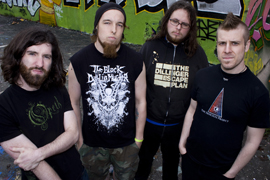 We, The Undersigned: “The Quest for Protest”

The Quest for Protest: 4 MEN + 1 VAN + 6000KM’S in 4 days. Fredericton based progressive metal band, We, The Undersigned are about to embark on an epic journey for Rock n’ Roll! They will be cutting their ‘Off With Their Heads’ Tour short to perform at MEGAFEST in Halifax, NS with one of their biggest influences, Protest The Hero as well as label mates Iron Giant and Black Moor as well as Halifax Progressive rockers Children of Eve. Their last scheduled date for the tour is November 21st in Vancouver BC so they will be traveling over 6000 KM’s directly back to the east coast to perform at this years MEGAFEST!

Megafest is produced by: TheMegaPhone.ca in association with Power Promotional Concepts. For more information please visit: www.themegaphone.ca or Join the Facebook event HERE.

the Skinny: Bordering the thin divide between inanity and insanity, New Brunswick-based metal outfit We, The Undersigned are set to make impact with the stagnant trenches of the current airwaves; their music, a mesh of metal and rock, boasts ass-spurring guitars, fissure inducing beats, and spine-shearing vocals. “Poised to turn some heads with their unique brand of art” (PureGrainAudio) and being in possession of “high energy, rousing, and delightfully gritty” music (Nightwaves Online Zine), “the band seems prepared to come into their own and make themselves a recognizable name for metal fans from coast-to-coast” (PureGrainAudio). We, The Undersigned were honoured having played the 2008 East-Coast Music Awards along with other established East-Coast rockers Iron Giant and Orchid’s Curse. Other bands whom We, The Undersigned are grateful to have played alongside include Children of Eve, What’s He Building in There?, Today I Caught The Plague, Protest the Hero, Fuck The Facts, Man With Target, Cancer Bats, and The End.