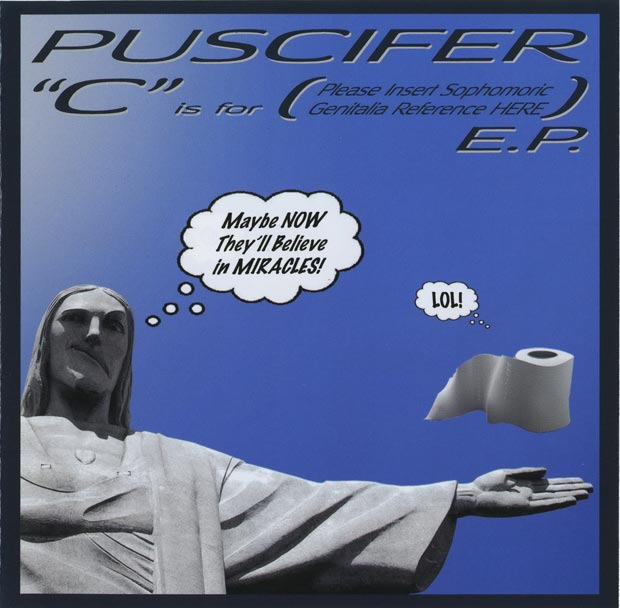 Despite taking a (slightly ironic, given their past album titles?) stab at childish expletives in their EP’s title, Puscifer slip in a track utterly dominated by juvenile references in the middle of it. It’s easy to forgive, though, because there are several sumptuous, slow-paced rock efforts tucked in here too. Officially a side project of Tool/ A Perfect Circle singer Maynard James Keenan, Puscifer take a toned-down, experimental approach to rock that at times borders on the ambient. “Polar Bear”, for example, is seriously haunting, and the perfect backdrop to Halloween. A shame in a way, as only those us of fortunate enough to have access to a review copy will hear it until several days afterwards.

The tracks with the female vocals are the ones that really launch the album, though. “The Mission’s” marching beat takes you through a rhythmic rampage of a track that seems to layer up as it goes along, peaking as a sing-a-long track with a seductive feminine side to it, provided by the energetic Milla Jovovich. Of the two live tracks, “Momma Sed” is a delicate, 90s-sounding piece of downbeat drone-rock with captivating twiddled bits on the end, while “Vagina Mine” is a rare let down, allowing repetition to take a little too much control. Both suggest Puscifer might be a phenomenal live proposition, though; clearly they’re capable of producing an extremely tight sound on stage, and indulging in some interesting instrumentals, too.

Carina Round takes over the girly role with some stunning harmonies on dark finale “The Humbling River”, and we’re left with an EP that suggests, given time, Puscifer could well be something to rival Maynard James Keenan’s previous musical achievements. They’re certainly one to watch.  [ END ]