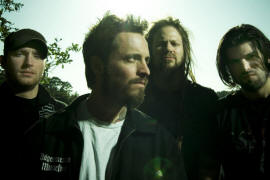 Bloodsimple: “Out To Get You”

In rock and roll music, heavy metal music or really any music for that matter, it seems to be that one of the most prominent challenges in an artist’s career is releasing their second record. The sophomore CD as it is referred to is tricky business; sometimes it turns out better and more popular than the first release but often times for whatever reason, it doesn’t catch on with fans. This is where we get the term “one-hit wonder” which has overtaken so many bands and musicians for decades now. One band that seems to be bucking this unwanted trend is the intense and ferocious four piece known as Bloodsimple. Following up a successful debut is never easy, but Bloodsimple is doing just that with the recent release of their sophomore LP Red Harvest.

Before getting into the band’s current endeavors, let’s briefly take a glance at what Bloodsimple is all about. The band is the creation of lead singer Tim Williams and guitarist Mike Kennedy, two members of a legendary New York hardcore group called Vision of Disorder. Even though they were initially known as Fix 8, Bloodsimple first got together as band in 2002. For the first couple of years after forming, the band got by playing numerous shows in their area, slowly trying to create a buzz for their music. They caught a huge break in 2004 when Mudvayne singer Chad Gray happened to catch one of the band’s gigs. Upon seeing them play, Gray offered to sign the band to his Bullygoat Records label and the members gladly accepted.

With a record deal in hand, Bloodsimple was now prepared to write and record its debut full length album. The results of this work was 2005’s A Cruel World, a hard and in your face introduction to the heavy metal scene. Produced by famed Rage Against the Machine producer Garth Richardson, the album was extremely successful for Bloodsimple and it established them as one of the mainstream’s top metal acts. This success resulted in lots of high profile touring with the likes of American Head Charge, Static-X, Stone Sour and the reborn Alice In Chains.

Not being a band that likes to take a lot of time off in between albums and touring, Bloodsimple has maintained a relentless commitment to their music. This is evidenced by the band’s frequent touring throughout 2006 and 2007 all the while preparing the follow up to A Cruel World. The band’s latest offering is called Red Harvest, a title taken from a 1929 book of the same name by Dashiell Hammett. This album was recorded at the end of 2006 in New Jersey along with the well respected producer Machine, known for his work with other metal acts such as Lamb of God and Every Time I Die.

While not necessarily a concept album, the record does present a story like theme to listeners which is also based on the Red Harvest novel. Lead Singer Tim Williams’ lyrics follow a story telling tone designed to draw the listener more deeply into the music and present them with characters that can be identified with. Since its release at the end of 2007, Red Harvest has produced a successful single called “Out To Get You” and has also performed well commercially.

To promote Red Harvest, Bloodsimple dedicated much of late 2007 and early 2008 to touring. The band just finished up a short tour of the United Kingdom at the end of January before taking a break from the road in February. So far the group doesn’t have any spring or summer tour dates confirmed, but expect to see the band on the road in North America sometime later in the year. For a band only together for about five years now, Bloodsimple has come an awfully long way for a metal band that gets little mainstream attention. These guys have quietly established themselves as one of today’s premiere metal bands, a status they will most likely maintain for some years to come.  [ END ]