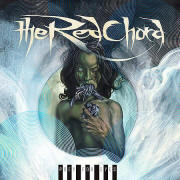 Imagine the most insane style of metal to date. Cannibal Corpse, Emmure, and See You Next Tuesday may be bands that come to mind; yet none of them even compare to the intensity exerted by The Red Chord. With their unique combination of grindcore and death metal, the band has been preparing to take the world on once again. Their latest album, Prey For Eyes, is nothing short of a masterpiece. The disc isn’t just another CD taking up space in my collection—I know I’ll have to buy a new copy in a year or so from over-playing it.

Prey For Eyes is The Red Chord’s most influential album to date. The opening track “Film Critiques And Militia Men” will tear the face off a small child in a matter of seconds. Although this track isn’t as grindcore-heavy as you might assume, the death metal influence makes up for it. Guy Kozowyk’s vocals are just as insane as usual, with little change in his brutal style.

“Pray For Eyes” is one of the tracks that stand out most. The track has a lot of odd time signatures and sporadic pinch harmonics that really catch you off guard. The tempo changes from a pulverizing pace, to a slow, lullaby pace—a seldom-heard side of The Red Chord. And what some people may not know is that Jonny Davy of Job For A Cowboy contributes guest vocals on the track. Pretty fuckin’ sweet, eh?

There is no downside throughout Prey For Eyes. The entire album kicks ass, the album art work is amazing (props to Paul Romano), and the recording quality is rich.  [ END ]