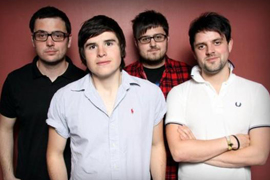 Straight Lines: “One to Watch”

The Skinny: More often than not, when bands are hailed as ‘one to watch’ they end up being unable to live up to the hype. For most of 2010, Straight Lines have featured on the undertones of British music press, and although they haven’t made the “big time” yet, they’ve developed a steady following, played some big UK festivals, and in November managed to pull off their own headline tour. So they might not be top of the pile thus far, but they’re definitely doing something right.

Like a strange mixture of Coheed and Cambria, Jimmy Eat World, and maybe a little Brand New, the Welsh quartet’s trademark is vocalist Tom Jenkins’ distinctive wavering tone, a little whiny, but not unpleasantly so.

Their first single, “Versus The Allegiance” was released earlier this year and is definitely worth a listen or two; its punk rock riffs and slow singalong section in the middle are perfectly suited to each other in a way that sums up Straight Lines’ capability for crafting interesting and affable songs. The band’s first full album release, Persistence In This Game, came in February 2010, and like it’s lead single, is a solid collection of songs that shows a skill and maturity from a promising young band.  [ END ]