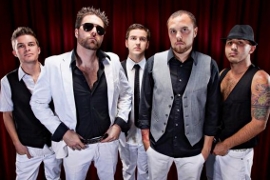 The Skinny: Pittsburgh natives Gene The Werewolf apparently set out with the intention of making music that is “as ridiculous as it is awesome.” And you only need to head to their MySpace page and listen to “Superhero” to see that they’ve achieved exactly what they set out to do.

The eponymous frontman Jon “Gene” Belan, who wears a signature white suit and black shirt combo, is a superb vocalist; his melodic stylings and killer range suits the music perfectly, which features elements of classic rock but with a modern twist.

As the band have developed a dedicated fanbase through extensive local shows, they continue to gain more attention through the likes of Twitter and Facebook. Gene the Werewolf’s debut EP Light Me Up was released in October of 2009 and is a great example of independent musicians not taking themselves too seriously, but making great music.

Light Me Up is a perfect summation of everything Gene is about: old school guitar riffs, tongue-in-cheek 80s style backup harmonies and big choruses, and the amusingly named “Come On I Gene” is perhaps the crowning moment of the record.

Gene’s penchant for caustic wackiness is again evident in the cover of “Thriller” that is on offer as a free download from the Gene The Werewolf website. While unwavering Michael Jackson fans might regard such a cover as some kind of sacrilege, it is perhaps quintessential Gene; a classic cocktail with a dash of pizzazz.  [ END ]