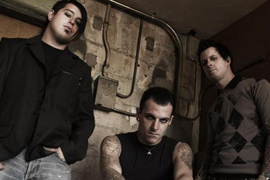 The Skinny: MySpace might not be the cool place to be at these days, but back in the not so far past, this is where I found out about some pretty amazing bands. Bands such as Bleed the Dream. I was lucky enough to catch them on the Warped Tour, again at the Warcon Records launch here in Toronto and again when they co-headlined the Taste of Chaos tour. They came back to do a mini tour at the 360 as well, rocking out in the early afternoon.

Having befriended 2/4ths of the band and tracking their each and every music endeavor, one thing remains the same, no matter how much time they take off, or how many side projects they have, they always go back to their Baltimore crew. Fortunately, singer Brandon Thomas, bassist Keith Thompson and Californian Dave Aguilera are back on the Bleed the Dream Train and it’s at full steam ahead.

Formed 7 years ago, in 2003 vocalist Brandon Thomas reached out to band mate Keith Thompson (who had been in L.A for a year) and decided to follow suit. Having recruited guitarist Dave Aguilera, the band had perfected their solid sound and began their journey touring city to city. Dave had created his own label Maphia Records which led to the release of 2 EP’s, Awake and Asleep.

After attracting the attention of Warped Tour creator Kevin Lyman, the band was signed to Warcon Enterprises LLC and their full-length album Built by Blood came to be. Soon after, they toured the Warped Tour and Taste of Chaos tours on the new album which incorporated both EPs as well as some new material. The talent is evident and so is the chemistry. The backing vocals offered by Keith Thompson coincide so well together with vocalist Brandon Thomas and the heavy guitar riffs are electrifying. Their “ballads” are well written and there is nothing negative I can say about this album… other than the fact I wish it were 20 tracks longer.

With a new album penned for later this year and a possible tour, and get this, a 40-track compilation album with all of their songs also being released this year, things are once again heating up. Staying with the tried and true, I could used all the clichés in the book, but the point I’m getting at, is a band with this much tenacity, and drive, can only mean one thing, you can expect kick ass music. Check these guys out on Facebook, Twitter, MySpace, and every other socializing network.  [ END ]