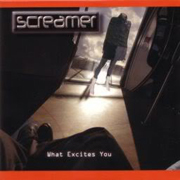 Screamer – “What Excites You”

The guitars on What Excites You squeal like mad all throughout the album. The music Screamer produces is slightly different than Judas Priest and other such classics, yet manages to retain just enough similarity. The album’s biggest draw is definitely the guitar work; it features a huge amount of dissonant sounds wound around the rest of the material. The style and tones are quite distinctive, despite all the throwbacks to past metal greats. Additionally, Bill Carter’s vocals are also quite appropriate and manage to well suit the musical style.

I just wish the band was able to write slightly more crisper material; something more euphoric rather than the wanky riffs that can be found on this CD. Though good, the guitars are a tad overdone, where more focus would have lead to greater results overall. Screamer certainly tackled a popular metal sub-genre, but they haven’t completely grasped it as one might hope. As a result, the final product is alright, but lacking a greater impact. Still,

Though overall it’s very good, this release is by no means comparable to Priest’s better work. The songs are strong, however, just tend to flirt with the listener instead of fully engaging him. If the band tightens up their sound for future recordings then we might have a great act on our hands. As it stands, What Excites You gets only a moderate recommendation for fans of classic metal.  [ END ]