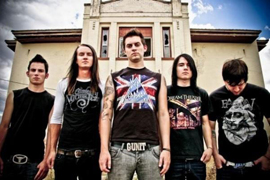 Fire In The Skies: “The Next Big Thing from Utah”

The conservative state of Utah may not be known for raising talented and ambitious metal bands, but one Ogden (near Salt Lake City) based group is working to change that. Now that they have been declared “The Next Big Thing from Utah,” that change seems to be well on its way. Fire in the Skies rose from the ashes of another band with members Brad (vocals), Mark (bass) and Nic (guitar). “We were all in another band and it was not working out,” said Brad, “We all kind of grew up and learned how to be in a band, then we decided to get really serious.”

The group is rounded out by Brett on drums and Chris on guitar. “They were young and super ambitious,” said Brad. Ambition and hard work has started to pay off for these 20-somethings, and the proof lies with the fact that they were recently signed to Matchless Records, based out of Salt Lake City, and released a six song album. But in metal music, fans are often the biggest measure of success, and fans of Fire in the Skies have spoken, voting them “The Next Big Thing from Utah” on radio station 97.5 FM The Blaze.

Ironically, the guys did not even know they were in the contest, let alone that they had won. Mark, who is Brad’s younger brother, heard the news through a friend. The band accredits the win to hard work and appreciation for their fans. It also provided reassurance that their hard work has not been in vain and that they are headed in the right direction. “Every band needs to be given a shot,” said Brad, “We show up to every show with all of our bells and whistles just ready to play. We actually come in and hang out with the fans.”

Fire in the Skies recently worked with producer Matt Winegar to produce their first EP. Winegar has previously worked with big name acts such as Primus and Coheed and Cambria. “He is a different breed of human being,” said Brad, “he does not care about feelings, he cares about quality. If he thinks you’re stupid he will tell you you’re stupid. But he has so much experience in the music world.” If you’re wondering about the band name, Brad says it, as well as several songs, are inspired by the epic poem “Dante’s Inferno.”

The band is currently on a Northwest tour, but their talents will soon take them overseas as they have been booked to perform several dates in South Africa this September. “Apparently we have a huge following in South Africa,” said Brad. In fact, the record label did not have anything to do with setting up the show. Rather, a promotion company in the African country contacted the band. But first and foremost, Fire in the Skies are focused on the here and now. “We plan to tour as much as possible and get our name out there as much as possible,” said Brad.  [ END ]