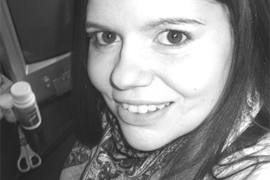 Growing up, I was a pop princess. The most influential bands of my childhood were *N Sync, Spice Girls, Backstreet Boys, Mariah Carey, and Five (sorry… 5ive). I lived for the release of Planet Pop, hoping beyond hope that *B-Witched would be on it this time around. I’d say I was lying about all this, but, well, that’d be lying.

As cheesy as they were, my pop CDs got me through one of the most difficult periods of my life. When I was 13 years old, I contracted meningitis. The illness and the complications that followed kept me hospitalized for the better part of three months. While everyone else was busy enjoying their last year of elementary school and finalizing the friendships they would carry on into high school, I was lying in a bed in a white room, alternately fighting for my life and being bored to death. The worst part wasn’t the sickness, though; it was the loneliness. I lost touch with virtually all my friends. Some people say I got through it on luck and luck alone, but I say it was the three M’s: Mom, Music, and Maury.

When high school rolled around, my friends started listening to a lot of rap. X-Zibit, Eminem, Dr. Dre. I too, became ghetto-fab, but it really didn’t suit me. Slash I hated it. Not so much the music, as the lifestyle. Way too much effort… it just wasn’t me. Being as fantastically gangsta as I was trying to be, it was unfathomable for me to go to school in jeans and a t-shirt, unshowered and a little greasy if necessary. Morning prep was measured in hours, not minutes… not that my efforts made a difference really. I still didn’t fit in, no matter how hard I tried, although it was probably because I was trying so hard.

Then, as if it was a gift from some omniscient being – via my grandfather – I got a Big Shiny Tunes tape. Yes, tape. He loves yard sales, okay? I listened to it once through and took in the sounds of the Smashing Pumpkins and Rob Zombie. I was hooked. My friends? Not so much. “Dragula” wasn’t Top 10 on the Hip-Hop R&B list – I doubt it could’ve been found anywhere on the Billboard chart – and my friends just weren’t having it. I resorted to listening to the tape secretly at home, leaving them none-the-wiser. After all, I’d been friends with these girls for years; I feared rejection, and I would’ve done anything and everything to remain part of our tight-knit little circle. At least, at the time. But things change.

Grades 10 & 11 were monumentally disastrous, and truth be told, I almost didn’t make it through. To put it nicely, my friends and I just weren’t clicking anymore. A “falling out” is an understatement; more like I was completely uptight, a total prude, and I made a lot of wrongful accusations and said some horrible, horrible things out of spite. They stopped speaking to me, and I spent an eternity alone and virtually friendless. I hated them for it for a long time, but in retrospect, I got what I deserved. Throw in a break-up, general family chaos, and your run-of-the-mill teen angst, and you have all the ingredients for a wrist-slitting good time. The word “depression” doesn’t even begin to describe the misery that was my life. One of my only escapes at the time was to leave the Booniest of Boonesville whenever I got the chance and go to the city; er… Whitby. I would get drunk with people much older than me, go to parties with people much cooler than me, and listen to music with people who were much more eclectic than me. Thus began my infatuation with bands like NoFX, Sublime, Guttermouth, and Rehab, to name a few. Hip-hop was still pretty prominent in my life, but it was starting to take a backseat to music that was so much more real: ska and punk and rock and whatever else I came across. I was searching, but I didn’t know exactly what for.

Then I found it – the thing I needed so badly. The first time was at a punk show back home. It was intangible; I couldn’t quite place it. It was some sort of energy, unnameable but ever-present. It allowed people to lose all control and just let the music take over. I didn’t understand it, but I wanted to, so I started going to all the local shows and battles of the bands, which I’m pretty sure numbered in the single digits during the course of the entire year. Fenelon Falls, Ontario doesn’t exactly have a blooming music scene. The venue of choice was the seniors’ home, but it was rarely available, and oftentimes shows were cancelled because they were double-booked with Bingo or couples’ bridge night. Again, I wish I were exaggerating. But I’m not.

It was obvious that major changes were happening in my life, but I can trace my full-on musical conversion to one person with one obsession. That person shall remain nameless. That obsession was Metallica. I don’t even remember how we met; truthfully, I think it was online on one of those rating websites. I was staying at my grandmother’s in Ajax, and this guy lived in Oshawa, and so we met up. We went back to his place, I was introduced to his parrot, we watched Big Momma’s House. Then he started to play guitar, and I was mesmerized. When he put on a Metallica DVD, I was totally blown away. The energy was there, and it was beautiful.

I never would’ve thought that, four years later, you’d find me here: sitting on a couch in my apartment in Lawrence Park – possibly the least rock neighbourhood in all of Toronto. Hostage Life is blaring on my stereo right now, much to the demise of Mr. Upstairs. It’s 11:30 am, and I have to be at work in an hour to lose myself deep in the realm of resale fashions. I wish I didn’t have to go, but the fact is, bills don’t pay themselves. I’ve got reviews and interviews coming out the yin-yang, plus an application to Harris Institute to become a recording arts manager, plus plans for an upcoming benefit show at the end of this year. Usually I don’t have time to ponder because I’m too caught up in everything around me, but occasionally, the thought crosses my mind… If not for Music, where would I be now? Probably still at York University, studying to become a French teacher because it was the next logical step for me. I definitely wouldn’t be living in Toronto, a university drop-out with much bigger plans on the horizon, $20 in my wallet and a song in my heart. Most importantly, I wouldn’t know any of the amazing people I’ve met through this website. Instead, I would be back home with my mom for the summer, working full-time at McDonalds, saving money and hating it because I would know that I was meant for so much more.

And this is it. This is what I was meant for. My life is chaotic and stressful and spontaneous, but most of all, it’s mine, and I love every second of it. And I owe that to so many people. My grandfather, for buying me that tape even though it was 2002 and most people didn’t even have tape decks anymore. The girls I grew up with who were once my friends, and I like to think still are, despite everything. The guy who made me listen to Metallica because he wanted nothing more than to sing like James Hetfield and shred like Kirk Hammett. Chris, for giving me the chance to do something wonderful with my life.

Looking back, if I had’ve done a single thing differently, I probably wouldn’t be where I am today. Or maybe I would, and my life would’ve just taken a different path towards the same destination. I don’t really know. All I know is, for the first time in my life, I am secure in not knowing what the future holds. I know that as long as people are able to feel joy and sadness and anger and love, there will be Music – and that’s all I need to make it through whatever comes my way.  [ END ]