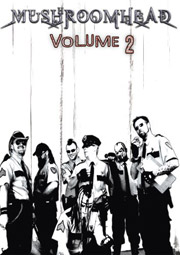 Mushroomhead is an Industrial Metal band that has been ruling the industrial scene for 16 years. That’s a long time for one band to still be together… and not be sick of each other. The band has an undeniable sound and their signature “X-Face” masks are masks that cannot be easily forgotten.

In any case, the new DVD is jam packed with shit any Mushroomhead fan would absolutely LOVE. It’s got backstage footage, live footage, the making of “Save Us”, as well as music videos for “Burn”, “12 Hundred”, “Simple Survival”, “Damage Done”, “Save Us”, and “Erase The Doubt”. Not a bad package whatsoever!

The majority of the DVD is just backstage footage of the band goofing off and having a good time. From love, shenanigans, making fun of each other, and all-out fighting, It’s clear that these guys are like family. The disc also contains live footage of the tracks “12 Hundred”, “Burn”, and “Simple Survival”, some of the best tracks off their latest release. Actually, come to think of it, even the music videos are all from their previous release.

If you love Mushroomhead, penis jokes, ass jokes, random stage shots, the band’s videos, or any other random shit you can think of, I highly recommend picking this DVD up. You won’t be disappointed.

Check out the: “Official Trailer”