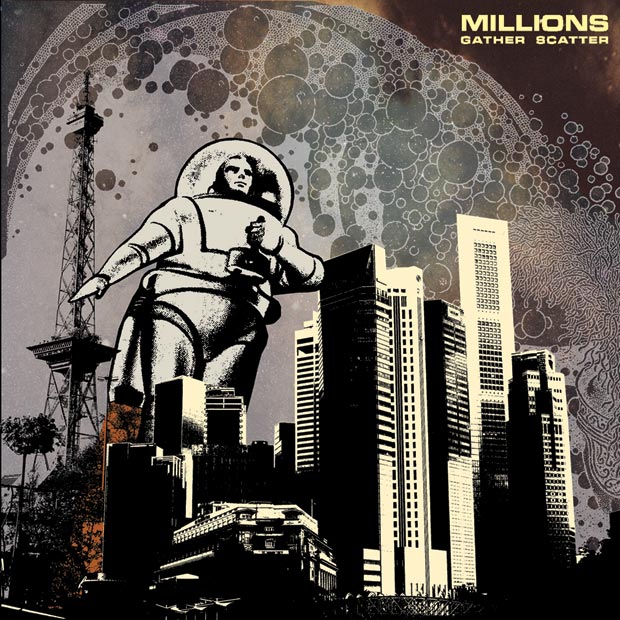 The bands bio describes the debut Millions CD, Gather Scatter as “the neurotic impatience of Black Flag scraping up against the anthemic rhythms of King Crimson.” Whatever words are used to describe it, Gather Scatter is extreme in it’s brutality and sheer musical obliteration. The listener is battered by track after pounding track akin to having a wrecking ball smashed into their foreheads leaving them spent and worn out and unable to recover. Released on Seventh Rule Records, the label founded by guitarist/vocalist Scott Flaster, this is a must-have record for fans of extreme metal music.

Lots of heavy guitars, even more tempo changes and an almost hardcore sensibility to it, this disc changes things up from song to song. The one constant that remains though is the incredibly harsh and in your face vocals.

In terms of lyrical content Gather Scatter is filled with lots of real world issues such as despair and despondency. There is an interesting theme behind the CD artwork which according to the bands bio “delves into a fantasy realm of primitive computer technology and retro sci-fi paranoia.” This Sci-fi imagery appears as if it was taken from a poster from the early days of Sci-fi movies.

No matter what the lyrical content is, this is a disc that is heavy and poised to raise some noise in an already noisy and crowded genre. Millions has dropped a bombshell of a debut album that should be welcomed with open arms by fans of bands such as Light Yourself On Fire and Akimbo.  [ END ]