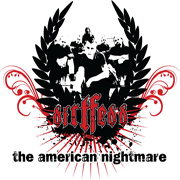 “Drink, Fight, Fuck, Salute.” These are the opening lines that set the tone for the rest of The American Nightmare, the brutal, in-your-face debut release from the Nebraska band, Dirtfedd. A combination of industrial rock and hardcore with a bit of swagger thrown in for good measure, this disc is full of aggression and is a full on, balls out, heavy-as-hell record. What makes this record stand out most is vocalist Dustin Travel’s unique blending of many different musical genres. He seamlessly alternates between low guttural growls, melodic screams and raspy shrieks, with the occasional clean vocal that adds nicely to the dramatic mood of the disc.

Muscular in stature and thoroughly pissed off, the music is relentlessly heavy and full of a blatant anger that is obvious all the way through. This is particularly noticeable on tracks like the blistering “Trained To Kill” and the closing track “Wasted” which ends on an odd note with an obscure answering machine message from a ‘white guy from the ghetto’ talking about NASCAR. Obviously, an inside joke but not one that translates well to the mainstream audience. To me it just sounded out of place.

The American Nightmare is a punishing work of endless riffs and double bass that as the bands bio states are “a warped illustration of modern society that coincides with each songs schizophrenic journey through the lives of the band members as they relate to a war-torn world.”

While not exactly my cup of tea, Dirtfedd have managed to combine numerous heavy metal styles with a ferocity that should appeal to a wide section of the Metal audience; especially those who are fans of all things extreme!  [ END ]