Armed to the teeth with style, grace, and aplomb, The Slang is reemerging with their brand new single “Divide,” which comes ahead of their debut full-length album of the same name. Due September 24th, the title track is a juicy slice of melodic power pop, reminiscent of one of those radio songs that somehow finds its way onto every format; from rock radio to pop, to adult contemporary, and the like.

Lyrically, “Divide” is about that stage of a failing relationship you reach where you’re just getting past the point of no return and the ‘divide’ between you is becoming more pronounced. The crash is about to happen, and you’re just bracing for the impact and hoping for the best.

On the inspiration behind “Divide,” lead singer John Bobo said, “I sometimes see a divide growing as people reveal their true personalities. It could be personal or viewed in the context of society. Careful to not choose a side… the hope is that people will explore the divide and find a way to come together.”

On the creative process behind the song, Bobo added, “The song was written and demoed within a day based off a very simple guitar lick that I had hanging around for a few years. (Bassist) Felix (Nieto) took control of the production and brought in some Nashville session players to build upon our demo. It was a lot of fun to hear where they took the song!”

There’s such an awesome story behind the band that you won’t even believe it. While Nieto was busy as an engineer and producer, running his own studio in the Washington DC area before starting The Slang, Bobo was pursuing a career in law enforcement, and actually turned down a job from the FBI as a special agent! Instead of hunting down the worst bad guys in the world, he opted to pursue his dream to be a musician, which has worked out quite well for him. All ten songs on Divide were written and recorded by the duo, and since it was their first album, they took it upon themselves to be less risk-averse when it came to songwriting than when they were writing their previous EPs. This led to more creative freedom to explore different sounds, which worked well with their relaxed perfectionism.

A very strong first full-length offering, The Slang is confidently moving forward in the right direction, with both precision and self-assurance. 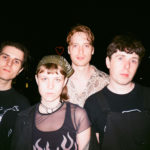 Stereo Six: The Effens Run Down Six of Their Effen Favourite Records 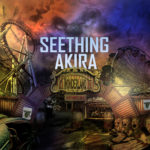