Three bands: X, Los Lobos, and The Blasters, embodying the authentic cultural diversity that is the true LA, brought live music to the Pacific Amphitheater on August 1st. Amid an Orange County crowd, too often split by extreme political factions, the irony of rockabilly, Chicano, and punk music coming together was not lost on many.

The opening salvo was fired by The Blasters (Phil Alvin; vocals and guitar, Keith Wyatt; guitar, John Bazz; bass, Bill Bateman; drums) as seats began to fill in what would turn out to be a fully sold-out show. The Blasters set was short but included crowd favorites like “Long White Cadillac” and “Marie Marie,” tunes that got the audience moving and singing along. The Blasters, who hail from Downey, California, seemed right at home in the sizable O.C. venue. Forty years into their career, they are a formidable, crowd-pleasing act. 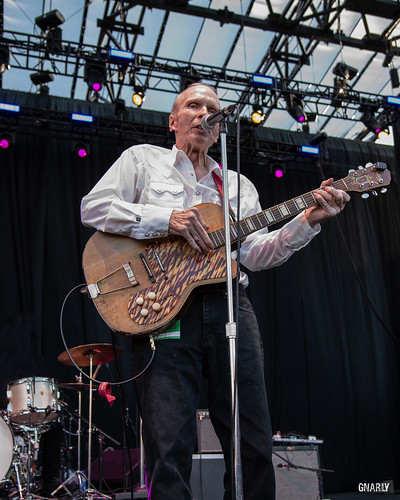 Los Lobos is the consummate L.A. band with a sound that blends rock, blues, Tex-Mex, country, and traditional musical elements of their Latino heritage. It would be limiting to put this multi-instrumental band in a single category, and they often change up their set on a whim. Starting with “Will the Wolf Survive?,” Los Lobos took the crowd into a set scattered with songs from a discography going back over 40 years. Singer David Hidalgo recounted for the crowd that it was the Alvin Brothers who helped Los Lobos get to where they are today, and they were joined onstage by Dave and Phil Alvin to play “Flat Top Joint,” a classic cut from The Blasters that is also covered on Los Lobos’ new album Native Sons.

X clearly had the audience’s attention from the start, playing hits like “Los Angeles” and “White Girl” at the beginning of the set, sounding as tight as ever. Notable is the fact that this original and longstanding lineup is celebrating the 40th anniversary of the release of their seminal album, Los Angeles; additionally, last year X released its first album in 35 years, Alphabetland. Tucked into the set was that title track, a few other explosive songs from their latest offering, especially the instant classic “Water and Wine.” Exene Cervenka and John Doe’s infectious vocal harmonies with Billy Zoom’s super-charged guitar licks sound as vital as ever.

After a year-and-a-half of restrictions from the COVID-19 pandemic, real live concerts are happening once again.