The band may be new, but the faces are all too familiar… We’re talking about garage rockers Burning Pools, a brand new trio led by former Smashing Pumpkins bassist Ginger Pooley and backed up by her husband Kristopher Pooley and guitarist Max Bernstein. Over the years, these three have worked with a who’s who of rock, indie, and pop, a list that includes Tom Morello, Jane’s Addiction, Weezer, Gwen Stefani, Morrissey, Liz Phair, Siouxsie Sious, Tegan and Sara, and so many more.

Although they are a recent creation, the idea for Burning Pools has been simmering for some time, since Ginger and Kristopher began demoing songs together that would showcase a clever mixture of pop hooks and empowering lyrics. The band recently released their debut single, “Bang Bang,” an introduction to their knack for gritty distorted guitars, intense drumming, and 1970s punk-inspired vocals. The song will be included on the band’s debut EP which they are currently readying for release.

We recently had the opportunity to speak with Ginger at greater length about Burning Pools, being in a band with your spouse, how Bernstein came to join the fold, and what to expect on the forthcoming EP.

Burning Pools is a band that’s been in the works for quite some time now. Just how far long ago did you come up with the idea to start this band?

Ginger Pooley: “We decided to form a band about three years ago. We started writing songs but it just never felt like the right time to release anything until now.”

You and Kristopher have been demoing songs for some time now. How many different sounds and styles did you experiment with before settling on the sound and techniques that are featured on your debut EP?

“You know, we never really experimented with many different styles at all. We both knew we wanted it to be a loud rock band so that’s what we did.”

“Definitely. There really hasn’t been any other version of this band other than what you hear.”

There are obviously many previous and current examples of bands featuring spouses, but were you at all hesitant to start a band with your husband Kristopher for fear of what effect it may have on your relationship?

“(laughs) That’s a good question. We really never stopped and questioned it. It just happened organically. Sometimes we have to think a little harder about how we say things to each other since there are so many other layers to our relationship. But it’s great and really convenient sharing a studio, etc.”

Completing the Burning Pools lineup is guitarist Max Bernstein. How did Max end up becoming involved in the band?

“Max and Kris met while working with (pop singer) Kesha. Kris became her music director while Max was playing guitar for her. They hit it off and when it was time for us to find a guitarist Max was the first person we called. He just shreds on guitar.”

You had been demoing songs with Kristopher prior to Max joining the fold. What would you say was the most important asset that Max brought with him to the writing and recording process?

“Max is a great musician but he also has no BS attitude. He is very honest, thoughtful and has a lot of musical integrity. He doesn’t sugarcoat anything which is a good asset to have when you want to cut to the chase make sure you’re releasing your best material.”

In terms of your EP, when did you begin work on these songs? Were they all recently written?

“We started working on them and demoing them a few years ago. It’s been a slow process because we’ve all been so busy. Though quarantine sucks, it has allowed us to focus on our recording and releasing of music.”

I’m not sure if you’d go so far as to call it a concept record, but the EP is a critique of the hierarchy of our value system. What motivated you to pursue this as a theme for this group of songs?

“It just happened naturally. There has been so much chaos in the world the last few years that it just came naturally to make our heavy songs match the themes that were so prevalent in everyone’s lives.”

There aren’t a lot of people who can say they toured and played with Billy Corgan, but you obviously can. What would you say your fondest memory was of your time with the Smashing Pumpkins? What was the one thing that you enjoyed most about it?

“I really loved that band, initially as a fan and then as a member. I love Billy and consider him a dear friend. The friendships I made were probably what I enjoyed the most. We worked really hard in rehearsals and one of my favourite memories was when that hard work paid off. We stepped onto the Redding Festival stage to headline and from the first note, I have to say we played a near-perfect show. The feeling of playing to that crowd is hard to beat. I will always remember that moment.”

It’s difficult to ask artists these days what their future plans are since everything is so uncertain, but what tentative plans do you have for Burning Pools moving forward? Is your intention to get out on the road as soon as you possibly can?

“We are releasing a few more singles coming up and then the EP. After that, we do hope to play some shows when things start opening up. Until then we’ll just keep writing and recording until we’re able to play live.” 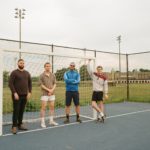