Mastodon has become an institution in modern metal. Their twenty years as a band have seen them grow from an underground darling to one of the biggest and most successful acts in both progressive and metal circles, and they are hailed by tastemakers and headbangers alike. Their 2004 album, Leviathan, was a turning point for a lot of fans and musicians, embracing the heavy, the proggy, and the outright fun of all that came before them with intensity and intricate musicianship. Since then, they have leapt from one amazing release to another with nary a misstep, and their Emperor Of Sand album from 2017 (read our review here) was a critical win for the band.

For their anniversary year of 2020, they decided to release a compilation of rare and unreleased tracks to commemorate the occasion and give a lil’ sumpin’-sumpin’ back to the fans. Medium Rarities is packed to the brim with tasty morsels of Mastodon history that is both a boon for collectors and a fine addendum for newer fans that are looking for a deeper look into the heart of the Georgian sludge masters.

The previously unreleased track, “Fallen Torches,” opens the proceedings with prime Mastodon fury and delight, and has more than a bit of modern progginess in the chorus, a la Monuments or TesseracT. It works seamlessly with its murderous riffs and waves of emotion, and the mid-section is eerie and builds into some of the most effective climaxes ever heard from the band.

The cover songs are a mixed bag of surprises. “A Commotion” is quite close to the original feel of the Feist song (although admittedly heavier), and was a great selection from a heavy band to show how wide their influences are. “A Spoonful Weighs A Ton” sounds more like a streamlined Yes song than The Flaming Lips favourite, a beautiful sway of light brushstrokes infused with primal distortion and bass-heavy weight. And finally, the classic “Orion” instrumental from the Metallica camp is an absolute joy to behold, highlighting all the finery from the original yet still sounding like Mastodon. Bloody magic.

The instrumental tracks are what they are – instrumental versions of fan favourites where the music does the talking and where the band gel best of all, with “Jaguar God” and “Halloween” taking the lead. Likewise, the live songs offer up very little in variation compared to the studio versions, although it is always great to hear “Blood & Thunder” and “Iron Tusk” in any setting.

Elsewhere, the songs from Aqua Teen Hunger Force and Game Of Thrones are still as wonderful as ever, and “Atlanta” comes off as a bloodthirsty Butthole Surfers song with Mastodon-esque bottom-end, not a huge surprise with Gibby Haynes on vocals (ALWAYS a welcome gift to the ears and senses).

Not a part of this compilation but equally part of the anniversary year hoopla and worth checking out is “Rufus Lives” from the Bill & Ted Face The Music soundtrack, the long-awaited third chapter in the saga. Following in the footsteps of Faith No More who had many fingers in the second movie pie, the band is confident and ballsy and the song is an absolute banger.

All in all, this is a fantastic addition to a stellar discography, and it’s a party from start to finish. As always, Mastodon knows who their fans are and how to make them smile big and wide, and the track selection makes for a kickass way to spend just over an hour without dragging in the slightest. And, it goes without saying, this is prime fodder to up the anticipation for the next studio album, a release that cannot come soon enough. 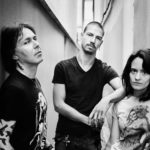