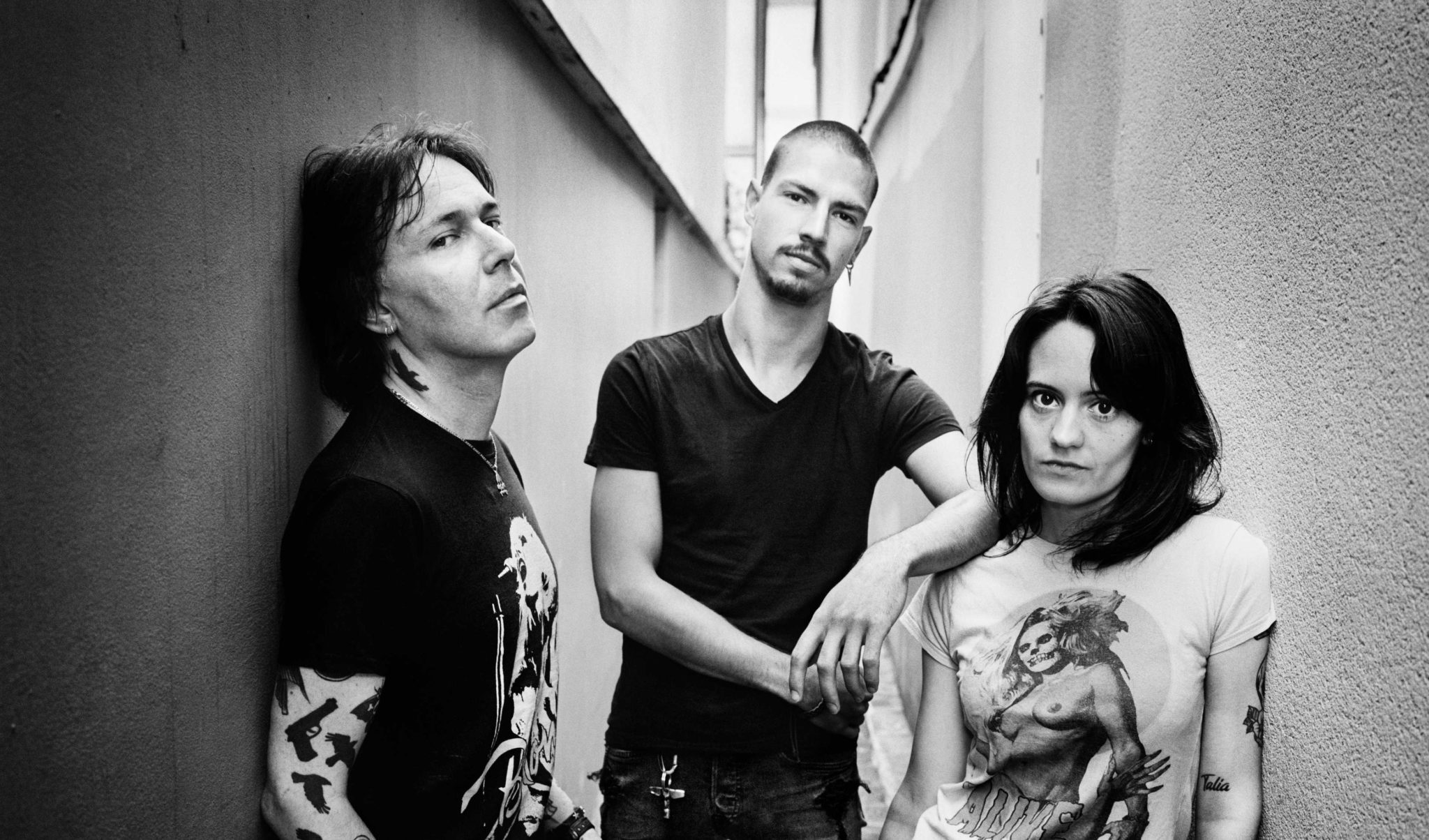 For all you fans of ‘90s alternative rock, Talia has got you covered with their brand new release, Whores On Parade. Out now via Manic Kat Records, the album is like heaven for aficionados of the ‘90s rock scene with its aggressive riffs, heavy bass lines, and pounding drums. Add on to that the accomplished lyricism from lead singer and guitarist Nicolas Costa and you got a no-nonsense rock record that takes no prisoners.

The recent release of Whores On Parade marks the fourth full-length studio album from the trio, and their first release since the 2018 EP, Let Sleeping Dogs Lie. The scene has certainly taken notice of Talia and their unapologetic, in your face attitude towards their music with the band being invited on countless tours with influential bands such as Reverend Horton Heat, Nashville Pussy, LA Guns, Smile Empty Soul, and Flaw.

With Whores On Parade now out there to consume in all of its glory, we connected with Talia for an exclusive track-by-track feature that runs down the details and origins behind all thirteen tracks on this impressive new album.

“I came up with the chorus on a plane, I went to the bathroom to record it because I didn’t want people to see me yelling into my phone. It’s LA from a foreigner’s point of view basically. We’ve spent a lot of time in Hollywood in the last four to five years, and all sorts of things happened, most of them were fun, some not… And there’s all this mythology about the Sunset Strip too, you easily feel like you’re in another dimension when you’re at The Rainbow and you see a band playing and there’s strippers dancing. But then you go to skid row and it’s a whole different reality, or you bump into really dangerous people, or some that wanna rip you off… The girl singing with me in the chorus is not Alice, it’s my cousin.”

“Most of the songs on Whores On Parade were written after touring the U.S., we came back to France and thought it was time to put out another record. I would basically write at night, sneak out of bed, try not to wake Alice up and go to the living room, pick up my electric guitar and play it unplugged, sing/whisper the melody. That song, even when I was playing it quietly on my couch, already had a feeling that was heavy and soft at the same time so we made the riff and the chorus as heavy as we could and the verses are more mellow.”

“It’s one go the ‘oldest’ songs on the record (they were all written in 2019 so not that old), along with ‘Lover Boy,’ it’s the only song we’ve played live before recording it. I think the lyrics are pretty obvious, when you’re in the middle of chaos there’s a part of you that wants to participate and another one that’s questioning everything and wondering who you can trust… I had a friend of mine play acoustic guitar on the chorus, I’ve known him since high school, we played our first gigs together. Was really cool having him on the record.”

“‘Lover Boy’ is the first song I wrote for the record. Lyrics are pretty obvious too, it’s about dysfunctional relationships that can turn into a nightmare. In the song the guy is the ‘pervert’ but it could have been the other way around. The sound we got mixing that song pretty much shaped the rest of the record.”

“We toured the United States four times and that was new to us, we saw a lot of bands playing live because we were on the same bill and a lot of them had songs about war, veterans… I realized that was a subject I had never written about. I was never in the army, I don’t know a lot about guns, I didn’t want it to be political or anti this anti that, so I just tried to put into words the images that come to my mind when I think about war.”

“This one is actually about the music business, how you can get screwed, how you want to keep going and how lonely you can feel. It’s not really obvious but that’s what it’s about. Most of the songs were pretty easy to record but I kind of struggled to get that one right, especially the vocals. Writing it was pretty easy though, it came to me one night I played it on my acoustic guitar and woke everybody up. For you musicians out there, the bass Alice used on the record is a Fender Precision from the 1970s but on this song for some reason the sound of it didn’t fit, so we tried a couple others and she ended up playing an old beat up Univox.”

“Different structure on this one, starts kind of ‘lo-fi,’ we tried to make the drums sound like a machine and there’s just one sloppy fuzz guitar. Then the bass and the guitars come in and then the main riff really gets the song going. I remember it was a lot of fun having Alice sing the ‘ouh ouh ouh” ’in the middle part, it’s probably the song where you can hear her the most.”

“I wrote it after a night out, got into an inebriated ‘small fight’ with some guy, it was just a couple of punches but it made me think about violence, murder… The music is pretty dark I would say but it’s not a punk song it has more of a deep/heavy feeling. Looking forward to playing this one live because it’s different than what we usually do.”

“Some people are probably gonna yell ‘rip off’ because it sounds like Nirvana (Bleach era), it’s the heaviest/loudest song we’ve ever come up with, there’s no real chorus just me yelling ‘YEAAAAAAAH’ on top of this riff. I wrote it fast playing guitar really loud in my basement and recorded it fast too, the vocals were done in just one take, sang it from beginning to end and that was it.”

10. “The Bane of Modern Civilization”

“It’s the one that made me put recorded in ‘October/November 2019’ on the inner sleeve because some people could think I’m singing about COVID-19 but that’s not the case. I wrote it before that whole thing started, it’s just an apocalypse song really, people getting sick and dying…”

“We had the title for the record, we were supposed to be done and I was just messing around in the studio, automatic writing really, then I plugged a couple of microphones, got behind the drum kit, then played the bass, guitars, sang whatever came to mind and that was it. So it’s the one song on the record that is just me. Alice listened to it and I asked her if she wanted to redo the bass but she said we should leave it like that.”

“It was supposed to be me on an acoustic guitar but then I thought it’d be more fun to have some guests playing along. So we brought in some old friends, the drummer with whom I was playing in junior high and the first bass player in Talia. Got everybody in my basement and had a lot of fun recording it, thinking about it it’s pretty weird since I’m singing about people hanging a witch…”

“It started with a riff that had been around for a long time but I changed it a little, made it ‘darker,’ then the verses and the chorus came pretty naturally, but I had a feeling the song was not done and that it needed an ending that was different from all the songs we already had. One day I was playing pretty loud in the basement and came up with the riff for the second part and for some reason started playing it faster and faster… We don’t usually write songs that exceed three to four minutes but this one is over five. We wanted the record to end with something powerful. It sounds like a lot of work but it was pretty easy to record…”