We have some serious stuff on our hands today… What it’s concerning is Mistaking Wasps For Dragonflies, the debut full-length album from the New Jersey band, Serious Matters. Just released last week, the record introduces listeners to the group’s impassioned brand of intense alternative rock.

The emergence of Serious Matters goes back to 2016 when guitarist Criss Madd and singer/guitarist Kenny Byles decided to try to build something off of the few demos they had already recorded together. Their debut EP, Can You See The Sky From Here, followed later that year, a release that received some positive word of mouth which led to the recording of Through It All in 2017. Their sound is most significantly derived from alternative rock, punk, and emo with Thrice, Taking Back Sunday, and Coheed & Cambria all being top sources of inspiration.

Now, in the year 2020, Serious Matters has emerged into a high flying quintet. For our latest installment of UnCovered, we spoke with both Kenny Byles and artist Shanna Morehouse about the album artwork for Mistaking Wasps For Dragonflies. Topics of discussion included the background behind the creative process, what the intention is behind the cover art, and whether the art was inspired by the subject matter of the album.

Shanna Morehouse: “They wanted something that was a bit more surreal with this piece. I tried using some colors from past releases on this as well. I came up with the idea that a vessel should be used to be kind of a hive. Where she would be the breeding ground for ideas whether good or bad.”

Tell us about Shanna and how you found her?

Kenny Byles: “Shanna has been a friend of mine since the same year the band was conceptualized in 2016. We worked at the same retail store where she would build bikes in the back and I would go and annoy her daily.”

Please elaborate on the medium(s) used when creating the art. How was it created?

Shanna: “I normally start with a pencil sketch on paper. Once I come up with an idea I’ll move over to procreate on the iPad. It’s one of those stylus and tablet programs.”

What were the partnership’s dynamics like? For example, was a specific look given, or did the Shanna have full free range?

Kenny: “With any art that Shanna does, we normally just let her run with her imagination. We do like to have callbacks in the artwork occasionally to past albums. I know we wanted to have sort of a watercolor look with lighter colors on this one.”

Would you consider Shanna an additional band member or someone contracted for just this piece?

Kenny: “Shanna is most definitely another band member. She has sat in on practices and is oftentimes in the loop of what the band’s future looks like with releases, merch, etc. We keep Shanna and Kris Khunacachak (graphic designer, photographer, and videographer) constantly in the loop and bother them weekly. They will always be extra members of the band and we would not be where we are without them.”

Did Shanna hear the album beforehand? Or, what kind of input did you give her?

Kenny: “I would send her the drafts of the RAW files as we were recording them in the studio over the course of the past year or so. I remember the first time she listened to anything, it was at one of our shows in New Jersey. We were standing outside and she was listening to the first versions of recordings off of my phone.”

Shanna: “It really helps to feel the vibe of the music.”

Shanna: “I have checked out albums based on artwork. They normally do not live up to the actual art itself, but sometimes they do.”

Kenny: “The artwork for us is always a major task when it comes to releasing music. To us, the artwork is what grabs the attention of the listener that has never heard of us before. We also like to have our artwork tell the story or mood of the release.”

Shanna: “Ideally, it should set the mood of the songs.”

Shanna: “I want them to relate to it. The person on the front can be the listener where they’re falling apart thinking that good things were actually bad.”

Kenny: “The album titled Mistaking Wasps for Dragonflies was supposed to interpret how dragonflies are supposed to resemble great things, but sometimes what you think is great, isn’t actually so great.”

Shanna: “The first person I think of is the guy that does the videography for Twenty One Pilots. I like how he captures the essence of what is going on for them.” 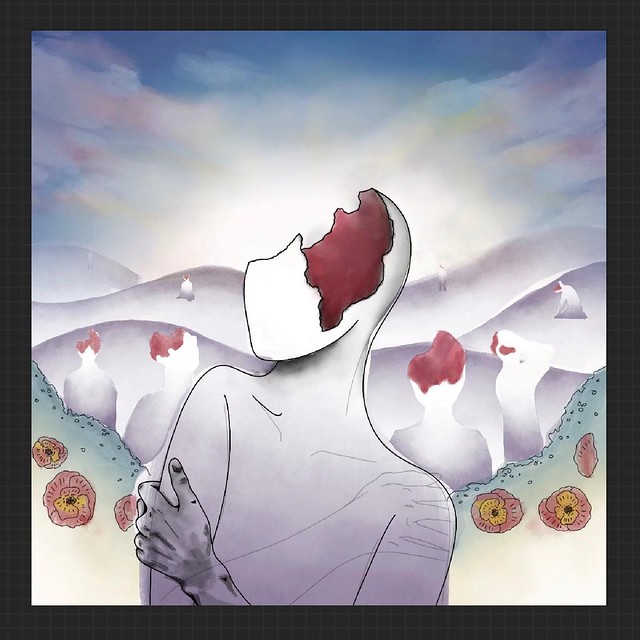 Shanna: “You have way more options and leeway working digitally. It doesn’t replace traditional art styles, but it is definitely more convenient.”

Kenny: “Our last EP, Through It All, had issues being pressed into t-shirts because there were over 1,000 recognized colours so we had to put it into white ink on a black t-shirt.”

Shanna: “I don’t like working under pressure, so if I have complete freedom with a time frame, it makes me anxious. It’s nice to have a direction from the band so I can be pushed in the right direction.”

Shanna: “Yes. I tried making the concept so that it covers most of the topics covered by the band members.”

Shanna: “The colours from their first EP are mixed in on the artwork. The flowers were taken from the second EP.”

Kenny: “I enjoy the fact that it hides our logo in the sky above the statue. I also really enjoy that it shows bits and pieces from the last few releases.”

Shanna: “Even though it took me forever, I really think the pattern in the back is super cool. I enjoy patterns like wood grain.”

Kenny: “My favourite album art ever would have to be Coheed and Cambria’s The Afterman released back in 2012. The colours and craziness of the art always stood out to me.”

Shanna: “Defqwop’s single called ‘Into the Ether,’ the self-titled album by Twenty One Pilots, and Flowerboy by Tyler the Creator.”