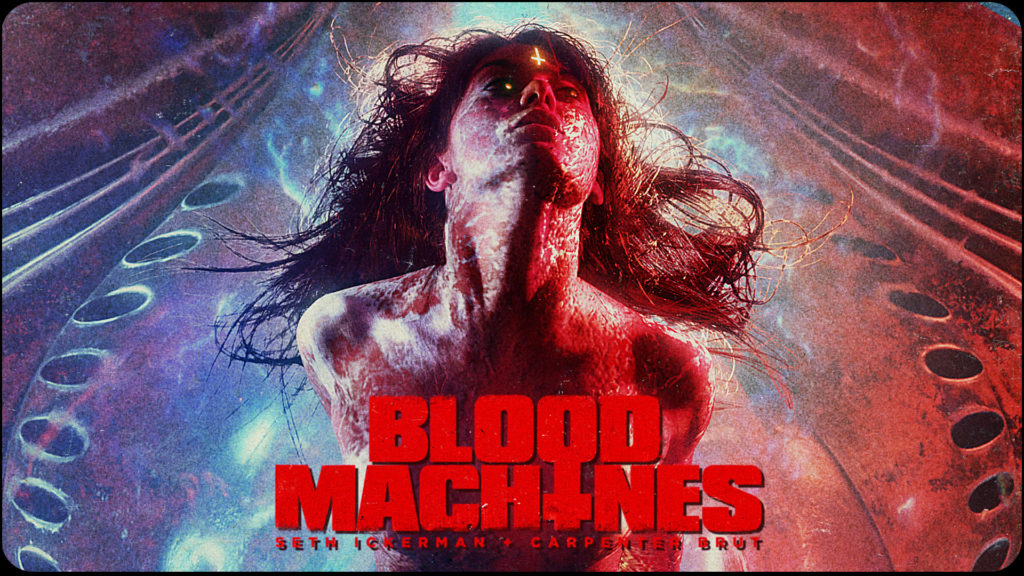 First some background: in late 2016, the synthwave artist Carpenter Brut released an official video for his single, “Turbo Killer.” Directed by the avant-garde French duo Seth Ickerman, the result was a feast of neon grindhouse sci-fi and an entirely appropriate visual narrative to accompany the music. The reception was overwhelming – for good reason – and the trio decided to take the concept further and craft a short feature based on “Turbo Killer.”

The result, Blood Machines (available on Vimeo on Demand and streaming on Shudder) is 50 minutes of, as William Gibson would have described it, “consensual shared hallucination.” The literary allusion is very much an intended one: this is, quite simply, the most effective and believable cyberpunk vision that has graced my screen in some time. And, while Blood Machines does owe more than its fair share to the great-grandfather of cyberpunk films, Bladerunner (Vascan, the protagonist is himself a bounty hunter charged with tracking rogue robots), do not expect the quiet interludes or atmospheric meandering that typified the original release, or its spiritual successors like Ghost In The Shell. This last comparison is also entirely appropriate, as the emergence of a human soul from a machine is the basis for Blood Machines’ entire narrative.

The music video that started it all. Synthwave, classic cars, and inverted crosses—what more do you need?

Yes, it is more than a touch derivative and overall fairly corny, but all the greatest science-fiction romps (Flash Gordon or Mad Max Beyond Thunderdome, for instance) have been. Ditto for the gratuitous nudity (Barbarella, anyone?) and the dubious acting (such as Krull or even Logan’s Run), but its aesthetic style and incredible soundtrack elevate it – matching the likes of Dark City or Pacific Rim in its attention to detail and art direction.

Blood Machines is also a new direction in music videos: while history is full of music videos that should be movies (Muse’s “Knights of Cydonia,” St Vincent’s “Cruel,” the Wes Anderson-esque “Oxford Comma” by Vampire Weekend… I could go on and on) “Turbo Killer” is the first to actually spawn its own feature that remains true to the story, visuals and music. It is a triumph for musicians and filmmakers alike and we can only hope it is the genesis of a new direction in the industry.

This isn’t the first short film to reap the fruits of Carpenter Brut’s signature synthwave soundtrack labours: anachronisms aside, the 2015 independent short Escape from Midwich Valley pairs his electronic darkness with a Lovecraftian horror theme, to the benefit of all concerned.

The final trailer is itself a spellbinding visual affair and, like the film, over too soon.

The only actual complaint I have about Blood Machines makes me sound like an ungrateful fanboy: I wish it were a full-length film. I understand the limitations of an independent release, especially one so dependent on time-consuming post-production, but I feel 50 minutes (the last five of which are titles) isn’t nearly enough when dealing with something so damn fun. I had similar complaints with the equally cheesy (but not quite as pretty) crowdfunded Kung Fury a few years back, but this is apparently being addressed by a much bigger budget and A-list cast for a feature-length sequel. I can only hope a similar future is on the horizon for Seth Ickerman, Carpenter Brut and their glorious, psychedelic dystopian vision.

The entire original soundtrack can be streamed from Carpenter Brut’s channel.

Cro-Mags – ‘In the Beginning’ [Album Review]

Ingested – ‘Where Only Gods May Tread’ [Album Review]