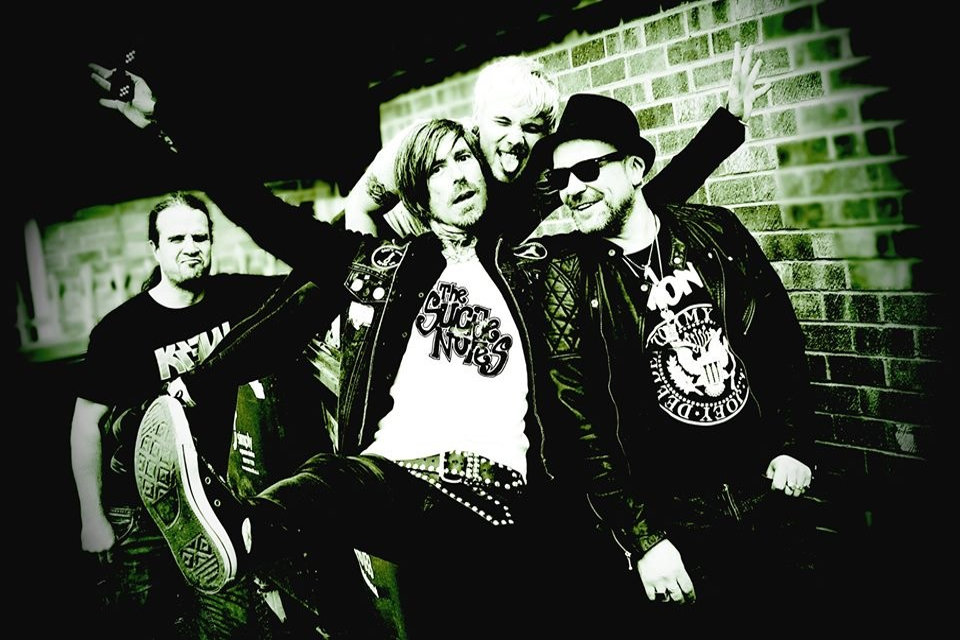 Stereo Six: THE SUICIDE NOTES Discuss the Inspirations Behind Their New Album ‘Smoke It Like a Cigarette (Acoustic Sessions)’

Straight from “the gutter” comes England’s The Suicide Notes. Now we don’t mean to use “gutter” in a derogatory sense but rather, we’re referring to The Suicide Notes dubbing themselves as a “gutter-trash rock n’ roll” band, which probably does best in capturing the essence of what they’re all about. Rising from the ashes of the UK sleaze-punk antiheroes The Black Bullets, The Suicide Notes are defined by their epic buzzsaw guitars, rock n’ roll swagger, and raw vocals topped off by a ton of that old school, back alley attitude that you don’t see much of anymore. You know, that Sex Pistols “bad assness.” All of these elements make for a powerhouse of a live show that’s full of sweat, energy, and attitude.

Currently, The Suicide Notes are promoting the Smoke It Like a Cigarette (Acoustic Sessions) release consisting of the single “Smoke It Like a Cigarette” and “Take a Bullet For Me,” now available to purchase via CD Baby. The band will be playing Rockaway Beach #44 in support of Vice Squad and Young Francis in London at the Hope and Anchor on December 13th (purchase tickets) followed by several festival appearances. They are currently writing and recording new music, which will keep the band off the road until sometime in the fall. For the latest instalment in our Stereo Six series, The Suicide Notes detailed six records that helped shape the band’s writing and recording of Smoke It Like a Cigarette (Acoustic Sessions).

First, check out the band’s new “Smoke It Like a Cigarette” music video:

01. The Dogs D’Amour – Graveyard of Empty Bottles (1989, China Records)
– Ok, so the most obvious first, but this was the Dogs at their laid-back best and it’s still an absolute classic. “I Think It’s Love Again,” the killer introspective “So Once Was I,” an all-acoustic “Errol Flynn,” and the dark story groove of “Comfort of the Devil” made this the essential soundtrack to far, far too many late candle-lit nights, slumped on a grubby rug somewhere with friends, 20 Marlboro, and a bottle of dirty cheap red wine. It was the Dogs’ highest-charting album, and, oh, that oh-so-cool numbered 10-inch vinyl. Sheer rock n’ roll class.

02. The Jacobites – Jacobites (1984, Mammoth Records)
– You wouldn’t have “Smoke it Like a Cigarette” without the Dogs D’Amour, and you wouldn’t have the Dogs without The Jacobites. Formed by Nikki Sudden and Dave Kusworth (Tyla’s later proto-Dogs compadre) from the ashes of The Swell Maps and the Subterranean Hawks, The Jacobites took the spirit of the Stones and the Faces, wrapped them up in even more velvet and scarves, added a bit of T-Rex and ‘70s glam, and capped the whole thing off with some proper songwriting. Their sophomore Robespierre’s Velvet Basement got arguably more critical acclaim, but the 1984 self-titled debut is where it all began for us.

Have a gander at the slick cover artwork for the six albums The Suicide Notes outlined: 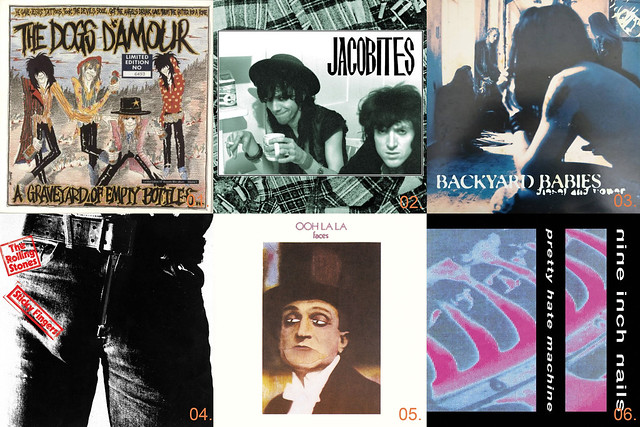 03. Backyard Babies – Diesel and Power (1994, Megarock Records)
– Strutting out of Sweden in 1994 with a shitload of attitude and a barrelful of eyeliner, the Babies are without doubt still one of the best rock bands alive, but back then we adored angry Nicke Borg and the snarl of a Les-Paul toting Dregen putting a rocket up the arse of garage punk and (by then bloated and corpulent) L.A.-style sleaze; in a world of melancholic ‘90s grunge, from the flick of a Zippo lighter and the gravel-growled “Days Go By With Cigarettes…” acoustic intro to “Love” this was whiskey-swilling, nicotine-soaked rock n’ roll which grabbed us by the throats and got us up and partying no matter how hungover we were.

04. The Rolling Stones – Sticky Fingers (1971, Rolling Stones Records)
– What is there to say about this that hasn’t been said 100 times over? It’s a cliché because it’s true, and without Sticky Fingers there’d be no guitars in the house and, ultimately, no Suicide Notes. The first Stones album of the 1970s, the first to properly feature the awesome playing of Mick Taylor (and no Brian Jones), and the first of the four classic-era creative-and-hedonistic-peak Stones records (along with Exile on Main Street, Goats Head Soup, and It’s Only Rock n’ Roll). “Brown Sugar,” “Sway,” “Bitch,” “Dead Flowers,” “Sister Morphine” and the amazing “Wild Horses;” rock n’ roll quite simply doesn’t get better than this. Maaaaan, if I could be a tenth as cool for a tenth as long…

Have a look at the artwork for the new single “Smoke It Like a Cigarette:” 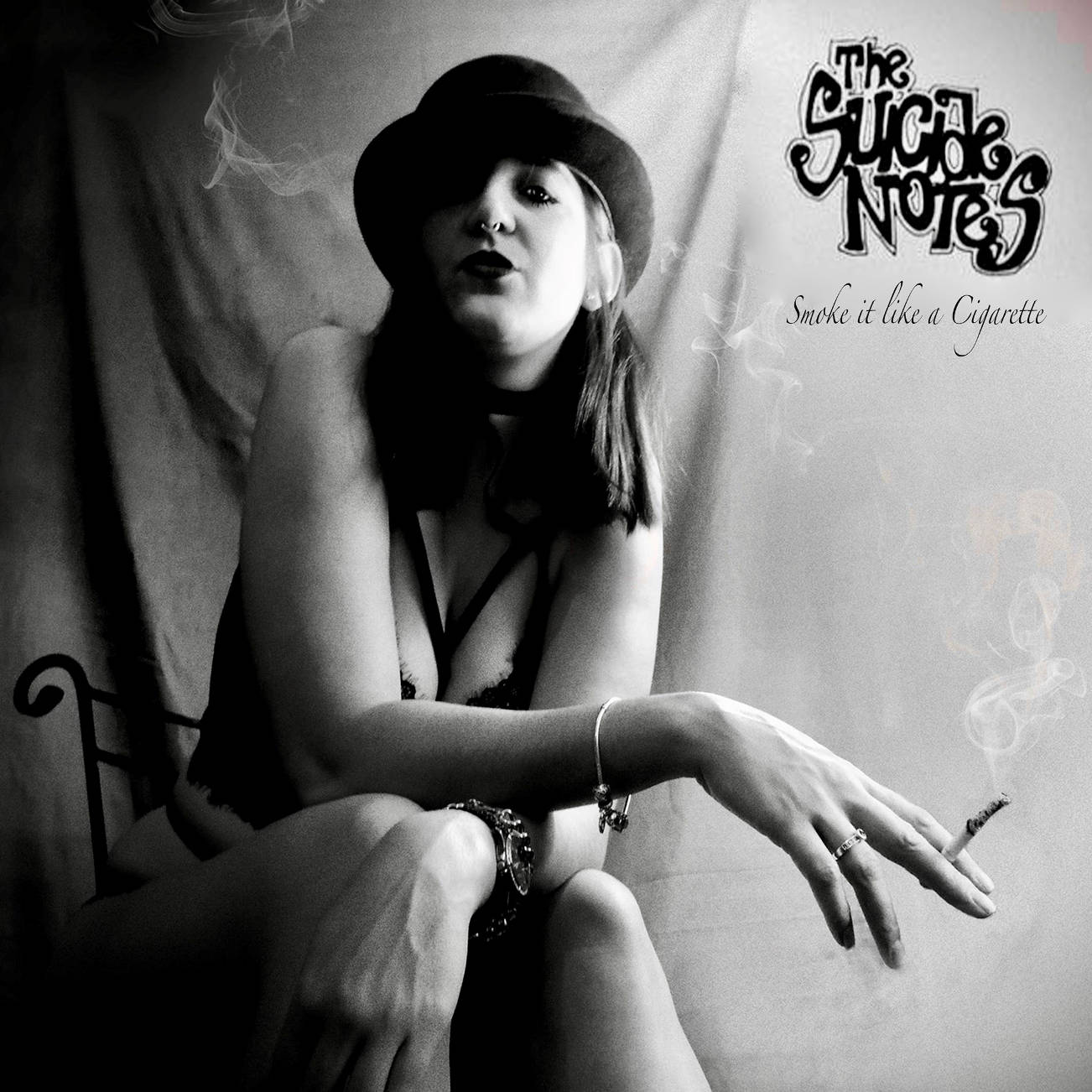 05. The Faces – Ooh La La (1973, Warner Bros)
– There was no space in this list for a Quireboys record (and where there’s the Suicide Notes, there’s a Quireboys album), but where you need the Quireboys, you need The Faces. Whilst we might have spent too many Saturday evenings fixing eyeliner and scarves and swaggering along to their best-known “Stay With Me,” the fourth and final Faces album Ooh La La, held together by producer Glyn Johns’ force of will and missing Rod Stewart for the first two weeks of the sessions, was an introspective, laid-back classic which graced our crashed-out, long-weekend-exhaustion Sunday nights. You can hear Ronnie Wood’s open-tunings and slide guitar seeping all over “Take a Bullet” and “Smoke it.”

06. [Curveball Answer] Nine Inch Nails – Pretty Hate Machine (1989, TVT Records)
– “Smoke it Like a Cigarette” might well be The Suicide Notes at our lyrically most open and honest, but if you want to hear the gut-wrenching pain of heartbreak and trauma bleed through onto a record there’s no more quintessential an example than Reznor’s 1989 debut. Pretty Hate Machine was an authentic, raw, cathartic friend through personal anguish and distress that put an arm around our shoulders and reminded us we weren’t in it alone. Musically, there might be a world of difference between the industrial synth-rock of “Sanctified,” “Down in it,” or “Ringfinger” and the acoustic “Smoke it…,” but spiritually they couldn’t be closer; there’s a thread from the ‘hope in adversity’ of early gospel and Delta blues to the Suicide Notes, and it passes right through Pretty Hate Machine.

Watch the acoustic demo music video for the new track “Take a Bullet For Me:”