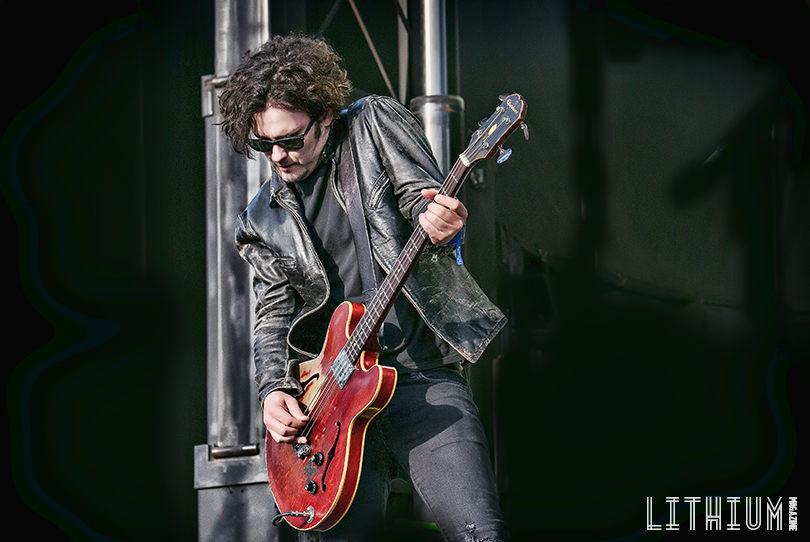 Moving the Toronto Urban Roots Festival (TURF) to September due to the Pan-Am Games proved to be advantageous as it provided an unofficial close to the summer music festival season.

Veteran UK reggae band UB40 used TURF to kick off their current tour and played selections from their career, including their most recent release, 2013’s Getting Over the Storm.

The South Stage once again offered a beautiful natural amphitheater and with the Gardiner as a backdrop. It provided the ideal location to catch Toronto’s The Sadies. Fans blanketed the hill to catch the the alt-country band. Their set ran the gamut from cow-punk to a song that wouldn’t have sounded out of place on the soundtrack to a Spaghetti Western.

Icelandic folk-pop band Of Monsters and Men brought the first day to a strong close. They dedicated most of their set to their just released album Beneath the Skin, showcasing more of an Arcade Fire-influenced orchestral rock sound. They still played all the favorites, including a slightly re-worked version of ‘Lionheart’ and rousing versions of ‘Little Talks’ and ‘Dirty Paws’ that had the audience singing along.

Toronto indie rockers The Elwins kicked off the second day with a fun set. After attending TURF as spectators in 2014, the band said they were excited to play the event. They played several songs from their latest release Playing For Keeps.

The rain that had been threatening all day finally hit during Jim Bryson’s set. Despite Bryson imploring the audience to stay, many sought shelter under the Gardiner with a dedicated few gathered at the front of the stage.

The sun came out again during Lucinda William‘s set, shining directly on the Louisiana-based country singer. She admitted that the downpour that preceded her set was nothing compared to some of the rain storms she had experienced. Ironically, her set did feature a song about rain. Playing music that ranged from country to the blues, her ace backing band Buick 6 provided the perfect accompaniment. She wrapped up her set with a cover of The Clash‘s ‘Should I Stay or Should I Go?’ and Neil Young‘s ‘Rocking in the Free World’.

Much of English folk-rock singer Passenger‘s, aka Michael David Rosenberg, set was taken up by story-telling but it didn’t matter; Rosenberg held the audience spellbound as he recounted a tale of meeting a tourist who was traveling the world to honour his deceased wife’s wishes to throwing in a jab at waiting in line to use the porta-potties at TURF.

Wilco played their new album Star Wars in its entirety.

The band played one of their first gigs in Toronto, leading frontman Jeff Tweedy to say, “You’ve been really good to us Toronto.” The rest of the set was made of all the hits, including, ‘Got You at the End of the Century’ and ‘Outta Site Outta Mind’ during the encore.

Cake frontman John McCrea doubtlessly endeared himself to the crowd when he took a pot shot at Prime Minister Stephen Harper’s “Old stock Canadians” comments. McCrea put on a good set despite suffering from bronchitis and kept up a rambling between song banter. The band wrapped up their set with their hits ‘Short Skirt/Long Jacket’ and ‘The Distance’.

Edward Sharpe and the Magnetic Zeros skirted the 11 pm curfew with a set that saw the folk rockers bringing several audience members on stage. Sharpe admitted that they didn’t have a set list, which gave it a loose feel that, admittedly, dragged on a bit too long.

The last day of TURF was a huge improvement. It was sunny but cool as Ron Hawkins and the Do Good Assassins took to the stage. Hawkins joked that he was going to focus on “Future hits” but did play ‘The Eternal Fatalist’ from his former band The Lowest of the Low.

It was one Ron to another as Ron Sexsmith kicked off the day at the West Stage. The Toronto artist’s set was mellow and included a song that he wrote for Bing Crosby, if Crosby was still alive to sing it and had a slight fanboy moment when he realized he was standing in the same spot where Neko Case would be standing. He finished the set with ‘Secret Heart’ (Yes kids, Sexsmith does Feist covers!).

Elliott BROOD showed no signs of fatigue after playing a gig at the Horseshoe the night before. They got the growing crowd dancing during ‘Oh Alberta!’ and played ‘Owen Sound’, a song the band admitted they don’t get to play often.

LA folk rockers Lord Huron were one of the more pleasant discoveries with a set that encompassed atmospheric indie rock and more traditional folk.

Black Rebel Motorcycle Club stood somewhat with their loud distorted rock, though the bluesy stomper ‘Ain’t No Easy Way’ and a couple acoustic songs as well as the use of a harmonica lent a rootsy feel to a couple songs. But, for the most part, it was the Jesus and Mary Chain-style rock they’re known for. Their appearance at TURF was the last before they head into the studio to work on their new album.

Neko Case‘s set made up for her show at the inaugural edition of TURF, which was rained out. Case is planning to release a box set so her set leaned heavily on “deep cuts”, something that became a bit of a running gag as she kept up a good between song banter. During a short encore, she dedicated a song to Toronto personality Sook-Yin Lee.

Due to the strict 10 pm curfew, The Pixies ran though set without stopping. Kicking off their set with ‘U Mass’, Frank Black showed good energy, especially during ‘Monkey Gone to Heaven’. They played all the hits, with Joey Santiago showcasing great guitar moves and wrapped up their set with ‘Where is my Mind?’.

Unfortunately, there was no encore due to the curfew, leaving a few people feeling disappointed, but getting to see the legendary band play provided an excellent cap to the weekend.