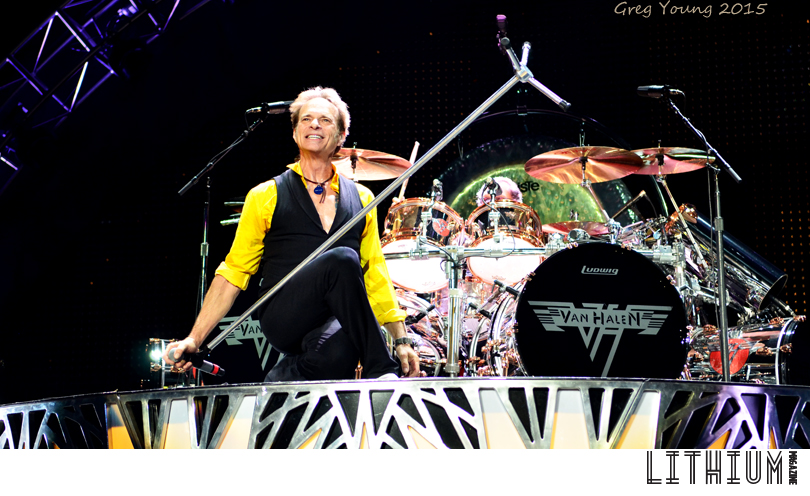 It was fifty shades of Dave this past Friday night at Molson Amphitheatre as stated in Lee Roth’s own words, except the analogy was fitting for the entire show. Van Halen was in the house, and in their wake they left a few head scratchers and a bizarre after-feeling that teetered on content and contempt.

When you take a band like Van Halen, beloved and adored by the rock and roll masses, you’re allowed room for error, and by damn, the fans were giving great allowances at this night.

Beginning with the good, the crowd was in a spectacular form, energized and filled with a sunshine high. The reverence was at full peak with an almost sold out stadium, and generation X’s as far as the eye could see. A slight moment of chaos ensued once the opening chords of an Eddie riff hit the sound waves, with herds of people rushing to get into place.

Roth hit the stage with his natural charisma, and by enormous default, is uber loved as the long-running front man. He entertained the crowd with his stories of licorice bondage as his prelude to fifty shades of Dave. The one constant was his stature and presence, which he was wasting no time in claiming.

Eddie Van Halen was on fire and seemingly has only gotten better. His nimble fingers continued to dazzle and excite the crowd, but nothing shined brighter than the giant grin he wore the entire night. When the big screens highlighted the virtuoso’s solos, the cheers were thundering and that alone was worth the ticket price. Alex and Wolfgang Van Halen did an amazing job slaying every single song.

The tunes that stole the show were “Ain’t Talkin’ ‘Bout Love”, “Beautiful Girls,” and “Hot for Teacher.”

Now, moving on to the not so great portion of the performance; Roth’s appearance was shocking and almost unrecognizable. Long gone are the days of flowing blonde locks and chiseled features; it seems rock and roll karma has claimed her lost time.  But that was expected, nobody remains young forever.  As well, Roth’s vocals have diminished greatly, and that would be forgivable.  While many artists have managed to maintain the vocal prowess over the years, it’s understood that, for the most part, things change.  However, forgetting the lyrics to your greatest hits is another story. It was painful to watch him mumble and lose his footing several times. The crowd would attempt to aid with the lyrics, but the moment was lost.  Sadly, this came at the expense of some great classics such as “Running with the Devil,” and “Jump.” It began to feel as though he was no longer trying and at times would just start the song again.

I understand that shit happens during live performances, but this went way beyond that, and people were paying good money for it. The only thing more awkward than the vocals was watching Roth attempt some hip thrusts and gyrating motions, which no longer resonate at 60+ years.  We certainly didn’t expect his signature scissor kicks, but more of an attempt would have been better than the cruise ship choreography.

All in all, this show was extremely frustrating and anti-climatic with its euphoric build-up of extreme musical genius being suffocated and subdued by the antics of David Lee Roth.