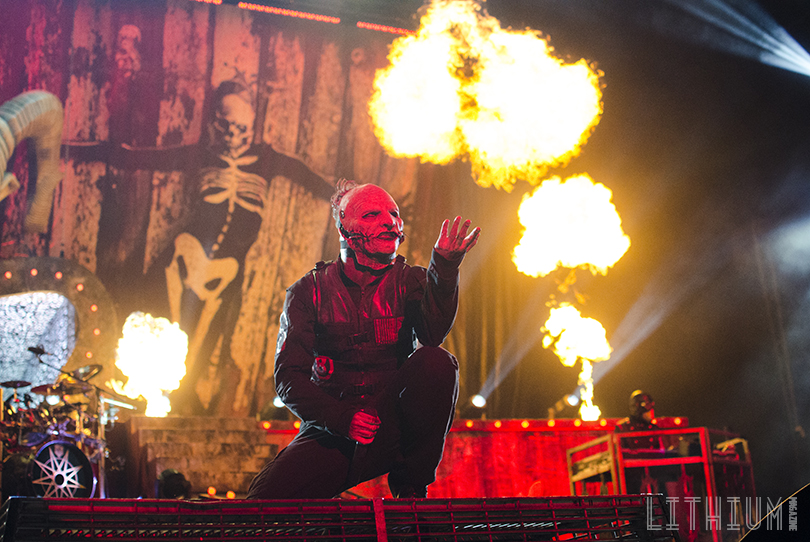 Slipknot with Lamb of God, Bullet for My Valentine, and Motionless in White – Molson Canadian Amphitheatre, Toronto – August 8, 2015

The Summers Last Stand Tour landed in Toronto on Saturday night with all four bands having one thing in common – to give show goers a memorable time in view of summer winding down with one of the season’s last metal shows.  And that, they did.  Fans, ranging from 6-60 years of age piled into the Molson Canadian Amphitheatre to watch two of metal’s fastest rising bands in support of two of the genre’s biggest veterans.

Kicking things off was Scanton, PA’s post-hardcore outfit Motionless in White.  They delivered a seven-song set of fan favourites including ‘Abigail,” “Devil’s Night,” and “Reincarnate.” Unfortunately, given the band’s extremely early time slot, the venue was just beginning to fill, with a selection of seats still empty.  However, the few thousand that were already present were clearly fans, and made enough noise to cause front man Chris Motionless Cerulli to comment on Toronto being the loudest venue they had encountered on the tour. This was a theme that would later play out with every band on the bill as they remarked on Toronto’s energy and enthusiasm.  A highlight of MiW’s short but sweet set was during “Unstoppable,” from the band’s current release Reincarnate, when Cerulli managed to get the entire crowd on its feet and head banging.

Up next – Welsh metalers Bullet For My Valentine, who ventured a seven-song set that commenced with “No Way Out,” from the band’s new album, Venom.  In quick succession, B4MV delivered “Your Betrayal,” which was amazingly tight as the band demonstrated an impressive oneness, as well as “Scream, Aim, Fire” from the album of the same name.  “It’s Saturday night and there’s a rock show in town, so I got a feeling its going to be a crazy fucking night tonight,” bellowed front man Matt Tuck as he roused the ever-growing audience filling the venue.  “Army of Noise,” also from the new release, then followed.  As the first notes played for “Tears Don’t Fall,” all hell broke loose as fans sprang up from their seats and lost their shit.  Ending the short set on a high note, B4MV played one of their oldest and most beloved songs, “Waking the Demon,” which had fans singing word for word with Tuck.

Moving onto a heavier sound and darker ambience, Lamb of God took the stage, delivering a ten-song set, much of which was backed by gloomy war-esque visuals.  The band just released their eighth studio album, V11: Sturm und Drang, while vocalist Randy Blythe also enjoys additional success from his book release of Dark Days, detailing his arrest, incarceration and trial surrounding a manslaughter charge in Czech Republic.  It was obvious the crowd was appreciative of the high energy performance as everyone stood, head banged, and rocked out in their own special way to each and every song.  The only one throwing down harder was Blythe, who led the band through songs like “Ghost Walking,” “Vigil,” and “Now You’ve Got Something to Die For”.   The set ended with “Redneck,” which replaced the shocking backdrop imagery with a huge American flag.

A thirty-minute set change ensued in order to prepare for the massive production that is Slipknot.  But no amount of YouTube or live stream video could have possibly prepared a first-timer for the outrageousness and insanity of such a show.   Words cannot adequately describe the performance, but to try a few – pyro (and lots of it), quality sound (of a level seldom heard in an outdoor venue), impact, interaction and respect (between band and fans), and energy (enough to rival a nuclear plant).

The band’s set listed like a ‘Best Of’, including “The Heretic Anthem,” “Psychosocial,” “Wait and Bleed,” “Duality,” “Devil in I,” “Spit it Out,” and “People = Shit” to name but 7 of 17 songs.  Several times throughout the evening, front man Corey Taylor allowed fans to take over vocals and was rewarded with the entire audience singing back to him at full volume – so loud, in fact, that they managed to completely drown him out during “Duality”.  He commented several times that he loved playing Toronto due to the craziness of the crowd, and referred to fans (commonly known as maggots) as family.

A highlight of the performance came during “Spit It Out” as Taylor instructed fans to get down and jump on his count, and it was overwhelming to see EVERYONE comply.

The set ended with a three-song encore that included “(sic)” and “Surfacing”, and left show goers happily exhausted.

The four-band five-hour show that comprised Summer’s Last Stand was unforgettable, and if we really have to say goodbye to summer soon, there was no better way to do it.