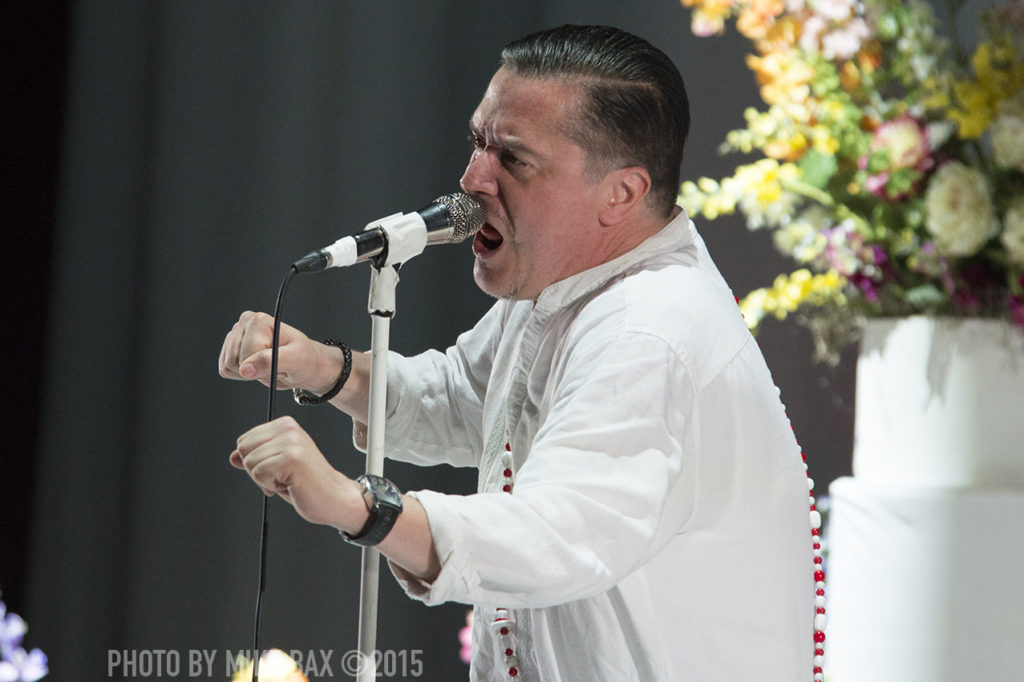 Faith No More took the 80’s by storm as an outfit consisting of rock music’s greatest names, with the current lineup of bassist Billy Gould, keyboardist Roddy Bottum, drummer Mike Bordin, guitarist Jon Hudson, and vocalist Mike Patton. They released six critically acclaimed albums throughout the 80’s — creating a whirlwind and mind boggling mix of everything from rock, metal, hip hop, R&B, lounge, jazz and everything in between, and becoming stars in the process — before calling it quits in 1998. Ten years later, Faith No More returned for a reunion tour and this year they released a brand new album, Sol Invictus, their first album in over 15 years. Their Sol Invictus tour brought them to Toronto for the second time this year – first to Sony Centre in May, and then to the Ricoh Coliseum this past Friday evening, to play for Toronto fans both old and new.

Most notable about the Faith No More show was their stage setting. Draped entirely in white with risers and platforms for levels, the stage brimming with flowers, it entirely looked like a wedding reception. The band was also decked out in white looking all together like the wedding band that would make granny gasp, clutch her pearls, and certainly disapprove. The beautiful and delicate setting made an almost garish juxtaposition to their 80’s infused hard rock sound which is very metal. The all-white setting and outfits made their lighting choices throughout the set stand out even more as everything became awash in colour.

They kicked off their set with the title track from their 1989 album The Real Thing before launching into the sexually suggestive “Be Aggressive” from Angel Dust released in 1992. Faith No More has plenty of material to choose from for this particular tour and what they did choose to play took fans down memory lane — whether or not they were old enough to remember when these songs were first released.

The band played an incredibly strong set full of fan favourites that the crowd devoured and demanded more. Their musicianship was rock solid and each member was in fine form. Patton’s vocals soared, quickly reminding me of how powerful and versatile he is as a rock singer. Bottum also did fine work on the keyboards and often times took the mic to address the crowd with their sincerest thanks.

Their stage banter was also a cause for amusement as they ripped on the Toronto mayor, who they deemed to be local rap artist Drake. They also mentioned that this was the last night they would be touring with Swedish band Refused and asked the crowd what would a bunch of Canadians do with a band of Swedes. They were expecting something raunchy but when they didn’t get a response, they threw out that it must be something to do with ice and hockey.

Particularly moments of Faith No More set for me consist of their performances of “Epic” and “Midlife Crisis” (where they threw in a brief interlude from Van Halen’s “Jump”), personal favourites. They also threw in a Commodores cover in the form of “Easy” and covered Bee Gee’s “I Started a Joke”. They played a number of new songs from Sol Invictus including “Cone of Shame”, “Black Friday, “Superhero” and “Motherfucker”.

The biggest surprise for fans was not one but two encores they played where they finally capped off the evening with “We Care a Lot”, before wishing everyone a safe journey home. I was amazed to see the show end at only 10:30, compared to most bands that make their final departure closer to the 11 o’clock hour.  I was also surprised to see so many empty seats in the coliseum, but this could have been due to the band’s prior show at Sony Centre, as well as the highly-hyped performance of Van Halen playing Molson Ampitheatre that same night. However, fans that came in support of Faith No More were rewarded in spades with one fantastic show.

Encore 2
We Care a Lot