I recently spoke with Tobias Monsters of the UK based synth punk band The Dead Betas about the group and their music. The Dead Betas play music that has been described as “Rittalin-Dodgin Adrenaline-Fuelled Synth-Smattered-Punk.” No matter how you describe it though, this UK act cranks out some extremely raw, extremely energetic punk music that is guaranteed to get you moving. Here’s how our conversation went.

What is the story behind the name, The Dead Betas?
Tobias: The name comes from two things, firstly, the term Dead Beats, used to describe people like us. Secondly, it’s mocking Aidan’s diabetes; basically his insulin producing beta cells on his pancreas are long dead.

When can we expect some new material?
Tobias: Our debut album will be out in the Autumn, with guest appearances from InMe’s Dave McPherson and Cult Maniax front man Big Al Mitchel!

What is your writing process like?
Tobias: Manic, angry and quick. If we can’t make something we like out of an idea within 45 minutes we generally chuck it. Usually involves Aidan starting some lyrics, having a riff idea, bringing them to practice where I finish lyric ideas and the other guys figure out the riffs between them, start to figure out a structure and if we don’t have something to practice before we are bored of what we’re doing, we just leave it. We’re all a bit hyper for spending too long on one thing!

Check out the song: “Chav Chant”

Times are tough these days. Do you have a job when you are not touring?
Tobias: Well, myself, Aidan and Martron are working on music-based degrees, Marton does some producing work on the side, Aidan has been known to do some landscape gardening when times are hard, I am a fully qualified HETAS engineer (solid fuel burning heating systems), and I use that in the building trade, Greg makes picture frames and Charly dabbles in factory work!

Who are the biggest influences on your playing?
Tobias: I can’t play, Aidan can’t play… so it’s hard to say, we’re a punk band, choose a shit musician, and they influence us.

Tell me about a book or two that you’ve read that you think other people should read?
Tobias: I’m going to be honest when I say; I really don’t like to read much. I read ‘Lord of the Rings’ and all the ‘Harry Potter’ books, but it’s rare a book can keep my hyperactivity at bay. I read the papers a lot, I like ‘The Guardian,’ and I read ‘Bizarre Magazine’ too. 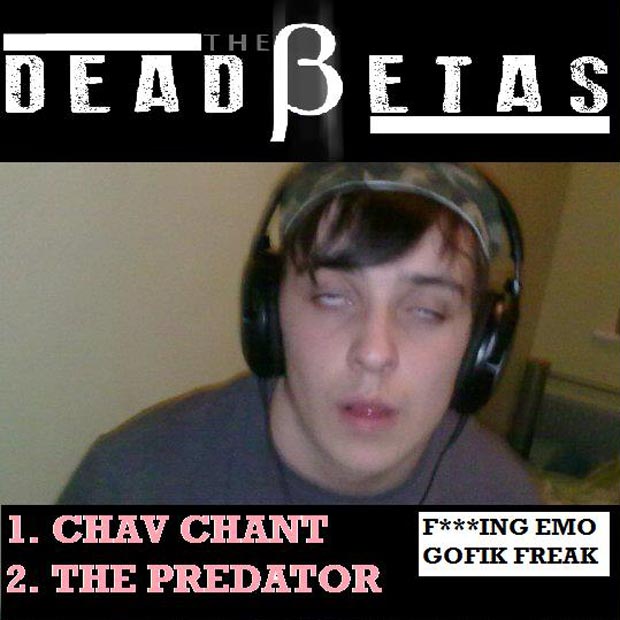 What three words best describe your band?
Tobias: Rittalin-Dodgin Adrenaline-Fuelled Synth-Smattered-Punk. Well, that’s what we’ve been reviewed as in the past, and I like it.

If you were a superhero, who would it be and why?
Tobias: Blade, because he just kicks ass!

What is next for The Dead Betas?
Tobias: Well, hopefully by next month we’ll have a 3 month tour booked with Prodigy and Enter Shikari as our 2 support acts. So, probably see you then.

Check out the song: “Bideford College”