In Flames are one of those bands who will be around forever. They started off in the early 90’s creating and crafting the art of Melodic Metal, a genre which has since influenced countless bands time and time again. Recently the group returned with a new record called Sounds of a Playground Fading, which hit charts all over the place – from the Top Rock Charts to the Billboard Top 200 in the States. I had a chance to sit down with front man Anders Fridén on Valentines day and ask him a thing or two about the new album, Jesper leaving the band and if Anders would be my Valentine.

So how is the tour going so far?
Anders: It’s be excellent. Good times, good bands, good people, good audience you know?

Any stand out or memorable moments that have happened on tour this far?
Anders: Well we had a bomb threat… that pretty much stood out. It happened in Albuquerque and right before the last song our tour manager basically came up to me on stage and said that I have to run out of here right now. I don’t think the bomb threat was at us, but more so the place we were playing, so that was a different experience.

Seeing how it is Valentines Day I was just wondering Anders if you would be my Valentine?
Anders: Fuck no.

There you have it, he shot me down. Moving on though, I was wondering how is it having Niclas back in the band playing with Bjorn who actually replaced him in the first place?
Anders: It’s awesome! We have known Niclas from the early days of the Gothenburg scene. We were all playing in different bands and he was around and since the start of In Flames he has been in and out of the band. When we had difficulties with Jesper, he helped us out and kind of saved us because without him we really don’t know what we would have done. We all spend more time together off stage, then on stage, so the whole vibe is really important and to have someone completely new in at this time would be quite difficult I feel. It’s a good time being in In Flames these days.

Check out the song: “Where The Dead Ships Dwell”

Did he ask to come in the band or did you guys ask?
Anders: We asked him, he was the first guy we thought of asking when Jesper had to leave. He was with us for the last year and a half of the “Sense of Purpose” tour and then we told Jesper to go home and take care of himself which didn’t happen so when it came time to part ways, we asked Niclas if he wanted to continue with us and join the band for real.

Sounds of a Playground Fading debuted at number 27 on the Billboard 200 album chart in the United States. The record also debuted at number 2 on the Top Hard Rock Chart, number 7 on the Top Rock Chart and number 5 on the Top Independent Chart. In addition, it also debuted at Number 1 of the Billboard German Albums chart, and at Number 12 of the Billboard Canadian Albums chart. Does any of this mean anything to you or is it just statistics?
Anders: It means the people buy the music and that helps. It’s a combination of people buying the music, listening to the music, people paying to see us play the music. It’s not like I am writing the numbers down or anything because I don’t care enough to do that, but it’s great to know people are interested in the music. The numbers show that people out there are into what we create, we don’t aim for a certain number, but the appreciation is great.

Could you tell me about how the writing of Sounds of a Playground Fading came out?
Anders: Well Bjorn wrote the guitar riffs and the main licks for this album and him and I did a lot of the arrangements together, I also do all the vocal melodies and lyrics. This album was quite different then we have done before, generally the album is done and I put on the vocal parts after, but this time I had a few ideas and we worked around the vocal melodies beforehand. Bjorn had a bag of riffs be brought to the studio then we just sat on the computer and pieced it together. 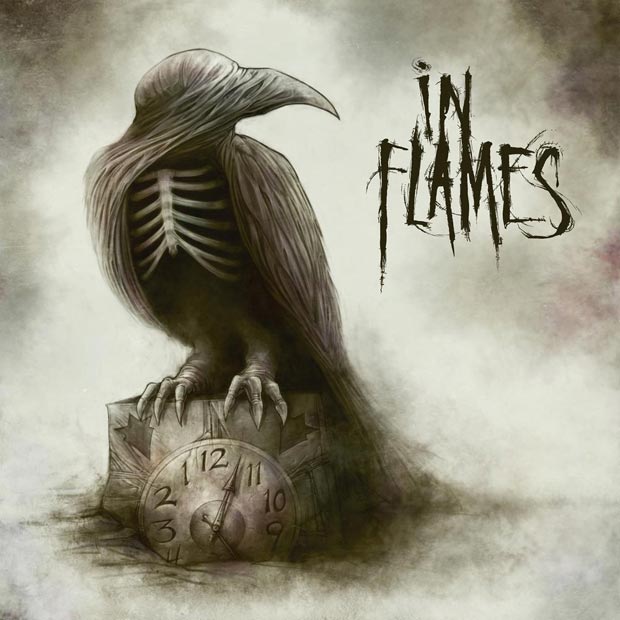 How would you descibe the lyrical evolution of the band from its beginnings to now?
Anders: In the beginning you just wanted to write big epic moments that sound cool with big words and after a while you learn the language, learn more about yourself and everything that surrounds you so it became quite self-centered. Now again I find it has become more of an outlook on the world that surrounds us. The stuff we did in the early days especially with Jester, Whoricle and Colony are quite connected so what’s the point of doing that again? Why do the same ideas for the same albums after you have already done them? There is no fun in that when you are in the band, I can understand some of the fans wanting that, but if you are the one creating it and playing it, it becomes boring like eating the same fucking dinner every night.

Recently a documentary series, I am sure you remember, called Metal Evolution aired on tv and In Flames had quite the little showcasing spot on one of the episodes about the Swedish metal scenes influence on metal. Have you been able to catch the documentary yet and what did you think about it?
Anders: No I haven’t had a chance to see any of it yet.

Have you seen any of Sam Dunn’s prior work on the portrayal of Metal?
Anders: I am aware of Sam and what he has done for Metal. I think it’s very hard to get everything in there, but he is doing a hell of a job.

With such a long career that In Flames has had there isn’t too much you haven’t done musically. What are some things you strive to do as a band you haven’t done yet?
Anders: Good question. I don’t know. We are just trying to have a good time really. I don’t feel that we have anything to say on albums and I’m not going up there on stage every night wondering what I’m going to eat when I’m done, that’s when I would start thinking “what the fuck am I doing with myself?” When I feel I have a connection with the fans and when I create music with the guys, that there is the force that drives me to continue with what we are doing. It’s more passion then thought.

Since it’s 2012, a lot of people feel the world is coming to an end. If you had to choose a way for the world to end how would you like to see it happen?
Anders: Quick and fast. It’s really hard to pick a way to die. I don’t want it to end. [laughs]

So what does In Flames have going on after this tour?
Anders: We have a few days left of this tour and then we go to Australia for the Soundwave Festival and we are there for a few weeks ans then we fly to South Africa to do a few shows there. After that we go home to Sweden for a bit then start a Scandinavian tour in April with a Swedish band called Death Destruction.

Check out the song: “Deliver Us”