Check out the song: “Fallen Disciples”

Throughout the lifespan of the band Threat Signal, members have came and gone leaving fans to wonder which talented musician might join the group for their next album. The only member which we can find on all three Threat Signal albums however, is vocalist Jon Howard. He brings to every release the powerful growls, screams and melodic voice that fans have come to love. I got the chance to ask Jon a few questions about the upcoming self-titled album, and I just might have even asked about his rad side project which starts with ‘A’. Read on to find out much more.

Great show in Oshawa. When was the last time you were in Oshawa prior to September 16th?
Jon: Thanks! It’s been a long time actually, we haven’t played there since 2007 I believe. I’m really glad we came back because the fans were just insane, such a fun show.

You have a new self-titled album coming out next month. What made you decide to go with Zeuss for this album?
Jon: Zeuss brought a lot to the table as a producer, engineer and mixer. We really wanted someone who understood the direction we were headed musically and could make our record sound HUGE – he definitely was the right guy for the job. It was great having Zeuss as an outside ear to critique our music and playing. We were very used to hearing our demos for the record, so having Zeuss hear everything for the first time, he was able to pick apart certain things and make each song that much better. He also really pushed us in the studio to get our best performances, he wouldn’t settle for just anything! The overall experience was great and we got everything we needed all in one shot. It was a package deal, including accommodation, tracking, editing, mixing, mastering, Zeuss does it all!!!

How do you guys go about writing your music?
Jon: Either Pat, Chris or Travis would start a song and send their idea via Guitar Pro to the band. We write all of our songs in a tab program called Guitar Pro, this makes it very easy to work over the internet and store each song idea for future use. When a song is finished in the program, Alex writes drums, we record a demo, then I write and track vocals. Each song is completely recorded in demo form before we even attempt to jam on it. Every member of this band contributed to the writing process on this album, which makes that a first for Threat Signal. 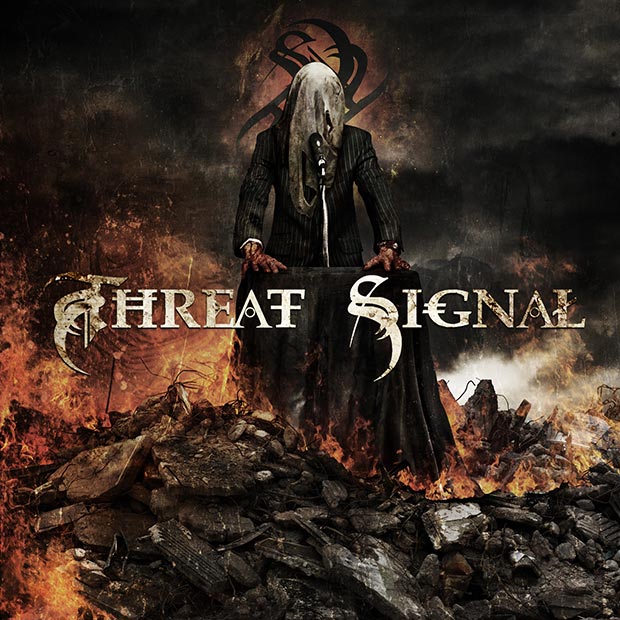 I saw you guys used 7 string guitars for your new songs and you guys sounded a lot more complex to me live. How would you say this album as a whole differentiates compared to your prior two releases?
Jon: This record is very different from both previous albums. We headed back to the roots of Under Reprisal, but we’ve created a lot heavier and darker sounding record. This record is also a lot more technical playing wise as well. We basically set out to write the heaviest, most evil-sounding record Threat Signal has ever done, and did that.

What lyrical contest do you write about for Threat Signal?
Jon: I really focused on world issues this time around. I really got into conspiracy theories and started asking myself a lot of questions about the world, politics and what really goes on here. I believe there is a lot that is hidden from our eyes, and that we must really dig to find any form of truth. It’s hard for me to put trust in anyone or anything these days, I have to constantly question what I am shown or told.

There are songs about starvation, war, decease, death, violence, greed, corruption, pain and misery… I focused on a lot of the bullshit going on in the world. However, speaking about these issues is mainly to gain awareness, and hope for change. If I can make 1 person look in the mirror and have them turn their life around to be a better person and help this world, I’ve done my job. I don’t think there is a need for the many of the problems civilization faces each day, we need to think positive and remove hate.

I love the artwork for the new album from Colin Marks. How did the art concept come about?
Jon: I was discussing ideas with Colin after he read the lyrics for the album and he suggested the idea to me, I thought it was perfect! We worked out the details and it came together quite well. Basically the album cover depicts a faceless politician with blood on his hands, dictating at a podium surrounded by devastation. This is meant to signify how the rich and powerful are trying to control this world, and in turn end up destroying us all. There is lot of corruption and greed in the political system, and it seems a lot of these people are making poor decisions based on personal and financial gain. Don’t get me wrong, there are some good people in politics but they are few and far between.

Every album has had a different line up. Do you find it really affects your sound with different musicians on board?
Jon: For sure it does. Also our mind frame and mood at the time effect our music and what we write. Under Reprisal set the bar for us, it contained very heavy music along with very melodic music, it showed we are very diverse. Vigilance took a different approach and focused on the more melodic side of Threat Signal, while the new self-titled record stays very heavy and focuses on the dark side. We always maintain the Threat Signal sound, but we grow and change as musicians along the way.

Check out the song: “Through My Eyes”

What are your tour plans for this new album?
Jon: We are setting up a lot of European dates for 2012 and we are trying our best to lock down a North American tour, no luck yet, but we are trying! Nothing is set in stone yet so I can’t really discuss it, however I’ll let you know that we really want to tour the fuck outta this record!

Are you planning to make a music video for this album? And for which song?
Jon: We are speaking to a director now about making 2 music videos. We are deciding on “Comatose”, “Face The Day” and “Trust In None”. We’ll see what happens there! I wish we had a video for the release of the album, but time just did not allow it… We’ll get something out soon.

Can we expect a new Arkaea album in the future?
Jon: I hope so! We have been speaking on and off about writing again. Basically when things slow down and I get some free time, I’ll be flying out to LA to write again with the boys. Not sure when that will be, but hopefully soon! That’s a very fun band to play with.

Whats happening in the Threat Signal future?
Jon: Just trying to promo the shit out of this album and find some great tours. We really think this record has something new to offer the metal scene and we are trying our best to spread the word. We’ll be updating our site regularly with video blogs, tabs, interviews, and many other cool things. We like to stay in touch with our fans all the time! 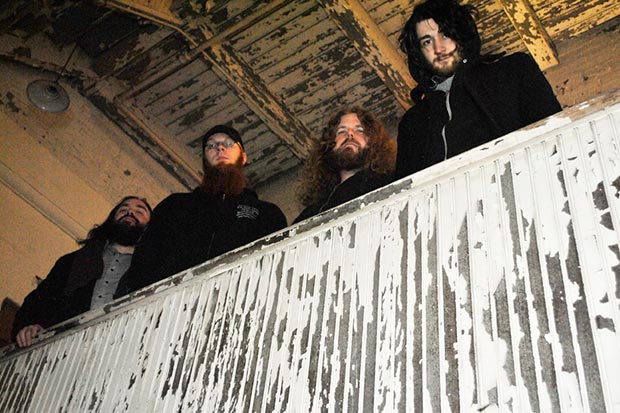 BENEATH OBLIVION Premieres Title Track “From Man To Dust” Online