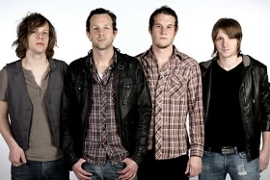 LOVEDRUG Give Fans Unique and Exclusive Access to New Album

Ohio alt-rockers Lovedrug are asking listeners to help fund their new studio album in return for exclusive content and restricted access to the band and recording process. Restricted content released thus far include a cover of Def Leppard’s “Hysteria”, with a making-of video, as well as a download of “Our War”, the first track from ‘EP-PART III’.

The “I Am Lovedrug” campaign is in partnership with UK-based fundraiser Pledge Music and band charity partner Mocha Club. Those who pledge can receive numerous Exclusives from the band, including their name in the album credits, framed original lyric and song notes, custom recordings, acoustic living-room performances, a private show in the band’s rehearsal space, and much more.

In addition to Exclusives, all pledge’s receive access to restricted content including bonus tracks, videos, peeks inside rehearsals, the studio, and other bits of Lovedrug’s world in the coming months. Restricted content release thus far includes 3 exclusive song downloads and videos with much, much more in store.