Coming off a coast-to-coast stint with Oso Oso, M.A.G.S., the indie rock project of singer-songwriter and producer Elliott Douglas, has officially joined the Smartpunk Records family. The Orlando-based label is home to notable acts in the alternative space such as Less Than Jake, RIVALS, The Swellers and Alive in Barcelona. The signing comes with the announcement of new music on the horizon for M.A.G.S. as his upcoming single, “Elephant,” will hit all streaming services February 3.

Known for his eclectic guitar work and energetic, punk-riled performances, M.A.G.S. has been featured on MTV News, Alternative Press, Pigeons & Planes, and UPROXX for his debut 2021 album Say Things That Matter. Since release, M.A.G.S. has toured with bands such as The Happy Fits, Oso Oso, Snarls, and Anxious while simultaneously working on new material.

The artist is excited to embark on this next era with Smartpunk Records, sharing that “It feels incredible to be a part of a community that embodies the spirit of punk and DIY. I’m blessed to be working with a label that goes the extra mile for its artists.”

“If you’ve seen M.A.G.S. live, you know the absolute raw power that Elliott brings to the stage. If you haven’t, his performance will certainly fill a void you might not know you had.

While we embrace all different genres at Smartpunk, we’re glad to work with artists that have very strong values and a good head on their shoulders. Working with Elliott has been no different, and we’re stoked to welcome him to the family.”

In support of new music, M.A.G.S. will be headlining an eight-date west coast album preview tour with support from Blvck Hippie. Fans can purchase tickets on M.A.G.S.’ official website here. 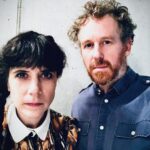 Kliffs Share “Alibi” Single/Video off Sophomore Album ‘After the Flattery’