Fighting off the negativity of the pandemic and the misery of being unable to tour, Dead Posey utilized their time productively to write tunes for their just-released debut EP, Blue Monday, and plan their musical world domination for when live shows could, once again, commence.

So, it’s V13. It’s day three at Download Festival, and I’m joined by Tony and Danyell.

Danyell with a Y.

Tony with a Y. So, I’m so goddamn awful with names it’s ridiculous. Now you’ve already played today? How did the set go?

Souza: “How did you miss our set? Were you stuck over here?”

I’ve been stuck in here, yeah,

Souza: “Well, the set was great. I mean, the people said if you build it, they will come, and they definitely did. They all came in the tent. Pretty packed, which we’re not expecting. So it’s pretty fabulous. Said hi to a bunch of people afterwards down at the barricade. So that was fun. But the stage was great. We had fun. No sleep, basically. So we’re on another level right now.”

This is the reason for the sunglasses, then?

Tony F: “Yeah, our eyes are just sunken in and exhausted if you can’t see them. We’re actually doing great. Yeah, that was an incredibly warm welcome.”

Danyell drops her sunglasses down from her eyes and shoots me a stare that is seductive, sexy, and terrifying rolled into one!

That cut my soul deep. That was terrifying.

Tony F: “We had an incredibly warm welcome though from the Download crowds. Amazing. So we truly hope to come back soon.”

Souza: “We heard a little secret that, I guess, apparently a band got to play twice yesterday because someone wasn’t able to make it. So we’re in the running to play an extra set. If anybody can’t play today.”

I’ll be keeping my ears out for that one because you were one of the bands I did want to see, but because this is what we do here. Only ever to get to see the big bands when press closes.

Tony F: “And V13. We’re the little blurb on that saying they wrote a thing saying to check us specifically out with a few other bands. So thank you for that.”

Definitely. Now, your music has drawn huge acclaim, and in quite a short period of time. What do you think the traction has been for all of that?

Tony F: “Ah, well, I mean, It’s always hard to say when you’re making the music what people like about it. You know, early on, we got some lucky breaks with getting the music exposed, and some various, you know, TV shows, and some ads and things like that, and these days, that really helps a band get their sound out there. But then really, since then, I think it’s just a combination of touring, meeting the fans, and then really listening to what we’re doing, what we’re saying.”

Souza: “Especially since the world ended, and now we’re finally back, all we want to do is be on the road, with the people rocking out every night. So we’re trying to get our first full-length finished. So we can just be touring non-stop.”

Tony F: “Yeah, we’re in; besides these shows, we’re recording, getting the first album ready. Few singles have come out from it already, but we’re going to keep bringing a few more out and try to kind of balance that with as many tours and shows as we can, and I think, you know, it’s old school, bringing it to the people and making connections seems to be doing it for us.”

I mean, you pretty much answered my first question like about your first studio album; as you know, you’re preempting everything here. So clearly, you’ve got some sort of powers. This is creeping me out a little bit. So yeah…

She’s going to do the eye thing again.

Danyell once again drops her shades below her eye line and throws me that conflicting stare.

Terrifying and sexy at the same time, it is spot on.

Now, obviously, as I said, you’ve answered that question now. Has the pandemic created any major problems for you as you grew?

Souza: “Sorry about that, just hit his hand. You don’t mind?”

Souza: “We’re having fun today. So here’s the thing. You know, we got signed in 2018. Got on the road immediately and started getting our sea legs on the road in 2019, as well. And then 2020 happens, got dropped. And now we’re back at it and trying to take over the world. We’re ready to go. So here we are.”

Tony F: “Yeah, I think the pandemic, if anything.”

Souza: “But it fucked everybody, and there’s so many people that passed away, and loss of jobs, and all that stuff. So we’re just a part of the soup, that sometimes you have to break it all down to build it back up. So that’s where we’re at.”

Tony F: “Yeah, it messed up the whole live thing for us because obviously Download got pushed back, and when the shows cancelled, it did allow us to, without the distraction of touring, write a bunch of music, so at least we looked at that is the silver lining, and it’s I think some of our best music we’ve ever written. That’s what we’re starting to put out and will continue to put out so.”

Souza: “Usually what happens with bands, you know, you evolve, the more you tour, or you just get more influences, and I feel like we’ve really developed our sound from our first EP after we started playing live more. We wanted it to be heavier. You know, even when we were in the studio, we had some kind of festival show playing at all times on mute. So we can like obviously write and record. We wanted that vibe with that punk rock, rock n’ roll energy while we’re locked away.”

Tony F: “Yeah, so I mean, we tried to find the blessings in it. And if anything, it made us really appreciate what we can all do here, you know, and play music live, which we, when you don’t have it for a year or two… You really want it.”

Now, obviously, the pandemic, you’ve already highlighted it was a shit show and ruined a lot of things for people.

Souza: “We have a new song called ‘Shit Show!’ We weren’t able to play it because our set was going too long. So they made us cut a song.”

Tony F: “That’s another unreleased song that will be coming out.”

Souza: “Perfect analogy of the world. That’s why we have a song called ‘Shit Show.’”

See, now I’m proving I’m a bit psychic with things as well, so I think good things now. So, was there anything positive that came out of it for you guys at all?

Souza: “I mean, I think just the album.”

Souza: “What this means to us just being out there touring and performing, it means everything to see the people, and it’s everything. It’s a life source. So we appreciate it more probably because of that happening. And just, I don’t know, man, happy to be alive, I guess.”

Tony F: “Yeah, maybe you sometimes you forget or take things for granted. So we certainly took playing live a bit, not for granted, but yeah, I mean, just even just being able to finally do this. This was booked. We’re going to be on Download 2020. And it’s amazing that you know, two and a half years after we booked it, we’re actually here doing it.”

Now, obviously, you mentioned you’ve played the Avalanche stage; you’ve actually talked about it a bit already. How was it? What was the atmosphere like in there? You already said you’ve met; you went down, you met some of the fans.

Souza: “Incredible. As soon as our set started, you know, everyone actually came into the tent. I was calling it a circus tent because it definitely felt like a little circus tent in there, and it was fun, and the crowd was wild and fun, and I think we warm them up for the next brands after us. So it’s a good time.”

Tony F: “I think, you know, we played a few of these kinds of festival dates, like in the States, this was the best one. I think that’s fair to say that this was our favourite festival performance to date.”

Danyell: “You guys do it differently across the pond. You guys love your rock n’ roll. So we’re happy to be here.”

Tony F: “We felt like a real appreciation of just all sorts of music because the band before us was like, you know, super duper heavy, and they were great, you know, and then we come. We were rockin’, but it’s like a totally different thing, but people were like, yeah, it seems like anything goes here, it’s great.”

Now, apart from the upcoming album, what, when can we expect that, by the way?

Souza: “No date yet because the business should have to work.”

Tony F: “We always say a date, then it gets pushed back.”

Souza: “So we don’t say no to say anything. Except for there’s going to be more singles coming. So there will be that before the album to give you some little samplers.”

Well, from the album, what’s next for the band? What’s going to go on?

Tony F: “We’ll keep putting singles out in advance of the album in between whatever shows and tours we can do.”

Danyell: “We just get to be on the road for like the next ten years.”

That’s the best thing a band can ever do. Now, I always like to end my interviews on a bit of a joke. I tell terrible jokes. I’ve got two for you if you want to hear them.

So did you hear about the guy that evaporated?

Things have been tough over the last few years, and my mate keeps saying cheer, mate, things could be worse. You could be stuck underground in a hole full of water. Do you know what! I know he means well.

Souza: “You were calling me this last night? The girl crawls out of the well?”

Souza: “Yeah, like the Ring girl. We stopped at a stop last night, and I got the bunk. Where’s the restroom? He said I looked like the girl from the Ring.”

Again, she does the eye thing again.

Danyell drops her sunglasses one final time to shoot me that look.

There we go. Yep, sexy, terrifying, and now I’m not watching my TV ever again. Thanks for that. Thank you so much, guys, for talking to us and enjoy the rest of your day. 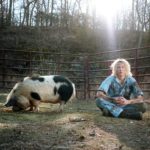 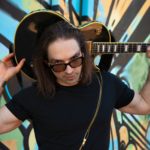