Another tour that was pushed back two years due to Covid and these loyal Leeds-based fans have hung on to tickets for years, so the biggest smile is across Danny Bowes’ face when the curtain finally drops and they can get on with their classic rock‘n’roll show.

Thunder also added a new up-and-coming “Classic Rock” band to each of the dates to keep them on their toes. For the remaining five shows these are Massive Wagons tonight (Leeds), Those Damn Crows (Cardiff), Piston (Birmingham), and Kris Barras Band (London). All great bands that I’ve seen before, but I’m glad we get those rambunctious lads from Lancaster here, always great value live on stage.

Massive Wagons are Baz Mills (vocals), Adam Thistlewaite (guitar), Alex Thistlewaite (drums), Adam ‘Bowzer’ Bouskill (bass) and Stevie Holl (guitar). They open with a dedication to Status Quo’s Rick Parfitt “Back To The Stack,” normally this would get everyone up and bouncing in a club, but the Arena feels a little cold tonight – it’s an all-seated gig, these classic rock fans now need a place to rest and access to toilets as well as the bars. Mills is constantly pacing up and down the stage, “Nervous Energy” he said, stopping only to put his feet on the monitors and start headbanging. He has his work cut out tonight to get this crowd moving.

The comedy comes across though, this band does not take themselves too seriously, Mills describes his pride in having their biggest backdrop banner on display and that “it’s the first one spelt correctly, the last one said Missive Wigans.” They play a new track – why not! Everything is probably new to the thousands gathered here early, “Triggered” sounds as powerful as the previous stuff – so watch out for that when it is released later this year. Have to say from a photographer’s point of view, the lighting was very poor and if Mills was anywhere near the front he was in constant shadow, not sure how the people up in the gods got to see much of him. He’s clearly suffering with his vocals too and apologizes halfway through the gig, however, this was still a high-energy performance and will have won them a few more fans. Their last song is appropriately “In It Together” and they finally get the crowd response they deserved with some audience participation in the chorus. Mills screaming “Rock ‘n’ Roll is alive and well and living in Leeds” as they walk off stage – job done!

Next, we have the special guests on the tour Ugly Kid Joe, who I didn’t realize were still a thing, and have never seen them live, so I’m keen for this as much as seeing Thunder. The band is reduced to three original members – vocalist Whitfield Crane, Klaus Eichstadt (guitar), Cordell Crockett (bass), then Mike Squires replaces Dave Fortman on guitar and Cam Greenwood, who normally drums for locals Terrorvision, replaces Zac Morris. I doubt most of the audience knows this, the majority probably just want to hear “that” song.

The band minus Crane starts with a jam session on stage, Crane then comically walks on looking very serious, dumps a rucksack near the drums and steps out onto the speaker stack staring at the front row. He says “You might be sat down now, but later I expect you to be up.” They start proper with “Neighbor” from the acclaimed debut album America’s Least Wanted. It resonates really quickly that they are more than just one song and whilst the band rock out, Crane wearing a hoodie and backward baseball cap prowls the stage, frequently spitting before singing/speaking the lyrics. Eichstadt is wearing the weirdest combo of the night – shorts and long socks, but that doesn’t stop him from producing some blistering solos.

“This is a rock show, we haven’t done one for a long time, I see a Motorhead T-Shirt out there” Crane starts his assault on getting the crowd on their feet. “During this next song when I lean forward, I want to hear you scream, and get progressively louder each time…Got it?,” I had my doubts, but to his and their credit it actually worked, as “No One Survives” is blasted out the crowd here does their duty and screams louder each time.

This starts a masterclass in how to get an ageing classic rock crowd moving, during “Devil’s Paradise” they are even waving their arms about, Greenwood breaks his drums and needs a replacement so we have a singing contest between the people on the floor and those in the higher tiers. “Cats in the Cradle” comes at a perfect time for this, with Crane now sitting on the speaker stack at the front.

Band intros bring bass, lead guitar, and drum solos (yawn) and then we find ourselves staring at the last remaining song “Everything About You” opens and Crane asks for everyone to stand up – they oblige!! This time the stewards don’t stop us dancing at the front and we all have a good bounce around and sing-along to that classic slice of nostalgic pop-rock. Crane then puts his rucksack back on and walks off to conquer his next gig – brilliant.

It is fair to say that Thunder is a very British institution, the first time I saw them was as Terraplane at Reading Festival in the eighties, then later at their first Donington Monsters of Rock Festival. Actually, I also saw them prior to Donington as support to Poison on their first-ever UK show at Nottingham Rock City. Back then it was long frizzy hair and cut-off T-Shirts, now it’s much shorter and silver hair, and there is a classy jacket to go with the skull T-Shirt for Danny Bowes. I saw David Coverdale last week on his Whitesnake farewell tour and the difference between them is chalk and cheese, it’s great to see a British rock singer that has clearly kept his vocals in good condition. Bowes tonight is very fine indeed. 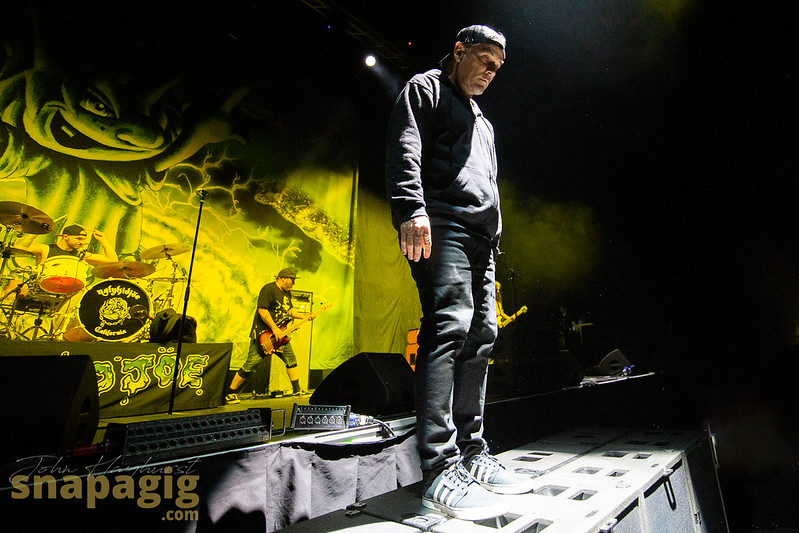 It is a testament to a great friendship that Danny Bowes (vocals), Luke Morley (guitars/keyboards), Ben Matthews (guitars/keyboards) and Harry James (drums) are still together from those Terraplane days and the chemistry is still clear to see. Tonight is a celebration of the old with a quick look at two new albums that they haven’t been able to tour due to Covid. Dopamine was released in April whilst All The Right Noises dropped last year.

It’s great that AC/DC wrote them an intro as “Thunderstruck” announces the curtain drop and the band appears, looking as sprightly as sixty-somethings can, Danny Bowes has the biggest Cheshire Cat grin “How ya doin’ Leeds” and then into “Last One Out Turn Off The Lights” and “Western Sky” two tracks from each of the new albums. Then “Higher Ground” a classic “Back Street Symphony” album song, tons of memories flood back – Bowes hasn’t quite got that bounce in his stride just yet, it is more a side-step shuffle but the vocals are as pure as they were in the ’90s. Luke Morley with his guitar slung low is throwing out riffs and solos for fun and the crowd here is lapping it up.

Carly Green and Julie McGuire are on backing vocals tonight and a great job they do adding some soul into the music. A very poignant moment with “Resurrection Day” as Bowes introduces it as being dedicated to everyone in here and those that aren’t after Covid, and during “Unraveling” Morley switches to his acoustic guitar to start and then produces an epic solo at the end. This is future power ballad stuff that will become a show staple I’m sure. All of this was in total contrast to the last time I saw Thunder on their acoustic show in York. This was 100 times better; more passion and volume and a better all-round showcase of their finest songs.

I come back to Back Street Symphony as one of the best debut albums of its time “Love Walked In” is always a fan favourite and tonight it shone like no other, then “Back Street Symphony” itself closes the set with everyone now on their feet.

Bowes asks us all if we are tired, a resounding “No” comes back and then “Dirty Love” is cranked to 11 and the whole place starts shaking. Consummate professional performance of how classic rock should be played, loud, with passion, soul and some mighty fine vocals and guitar – this was a proper rock show, I think we’ve all been Thunderstruck. 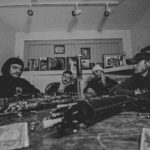 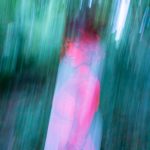