Representative of who they are as a band, Fox Lake’s latest single “Dog Eat Dog” is a complete package. They have spent a long time now honing a sound that’s right to them, and the payoff is large, with the song a combination of all of the aspects for which the members want their group to be known. Energetic, aggressive, accessible, incomparable, these are all ideals to which Fox Lake strives towards, and wholeheartedly achieves with sharp, intense tracks such as this.

The basics of “Dog Eat Dog” were written many years ago, and as it began to hang around, it became a song that the band got interested in revisiting. It’s also quite topical, with the song touching on the “dog eat dog” mentality of today where everyone is always ready to jump down everyone’s throats at the slightest hint of discord or disagreement.

It’s been a productive, effective first five years for the band since they formed in 2017. They have conjured up an original, inventive sound that combines the attitude of early 1990s boom-bap hip-hop, the aggression of hardcore, the catchiness of metalcore, and the well-composed song structures of pop. Fox Lake has been on a steady rise since the fall 2020 release of their debut album Silence & Violence. Despite the constraints present during this time, they still managed to earn over one million plays, collaborate with artists such as Gideon and Cane Hill, and take part in multiple shows across the United States.

As fast fans of hip-hop, Fox Lake have pretty well-formed opinions about their favourite songs. Today the band shares with us five of the most inspirational hip-hop tracks that have helped them become the band they are today.

“With all these songs, the most important element we try to draw inspiration from is the groove. We liked how the beat stays consistent while the vocals carry and establish the real rhythmic elements of this song.”

“This song is one of our all-time favourite rap tracks. This might have less direct inspiration for our new songs, but we also seem to go back to this when we are thinking about the flow of the vocals. Also, this trap has such an aggressive bravado without feeling over the top and while sitting into a groove. That’s something we try to bring to the metal/hardcore sound.”

“The way this song’s vocal flow plays with, and against, the instrumental helped inspire the first verse and chorus of ‘Dog Eat Dog.’ Also, lyrically this one was great to draw inspiration from within the idea of speaking about personal growth as it relates to social or current issues.”

“‘Hoop Earrings’ dropped about a week before we started putting the finishing touches on the instruments for ‘Dog Eat Dog.’ As soon as Nathan showed it to me, I was hooked, and from then on it was on repeat the whole weekend we were in the studio. The way the vocals cut through the relatively simple instrumental was something that directly influenced how we structured a few of the verses and the chorus. It just punches like Tyson in his prime, and it’s impossible to hear it and NOT make the stank face.”

“When I started writing the instruments for ‘Dog Eat Dog,’ I had one thing in mind; make something with an undeniable groove. There are very few songs in the world that bounce as undeniably as ‘Let Me Clear My Throat,’ and I found myself coming back to it constantly when I was looking for inspiration for the vibe. It’s not a ‘heavy’ track, it’s not dark or dissonant, but it hits like a train and you can’t help but bob your head. The live recording of the crowd throughout the song gives it so much energy, and I wanted to create something that had that same vibe.” 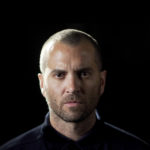 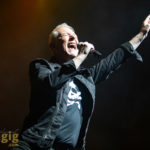