Listen up, pay attention, tune in, take notice, or you may not hear “The Silence.” Aggressive, upbeat, and self-assured, Lyoness is exploding with the release of their latest music video for the rambunctious and rocking single “The Silence,” the first track to be unveiled from the band’s debut EP Fool’s Gold. This song will get you nice and warmed up ahead of the release of the EP on April 29th, a raw, energetic set of six songs that will certainly put this young band on the musical map.

Composed of lead singer Gigi Gold and guitarist Steph Carter, Lyoness has already been making people take notice of their extensive musical qualities and abilities, with Rise Against recently mentioning their admiration for the band in Kerrang Magazine.

Aside from “The Silence,” Fool’s Gold has already produced some successful moments for the band, with “Heroine” and “Know Thyself” both having been released to much praise and applause. When asked about “The Silence,” Gigi simply states:

“‘The Silence’ is a song for anyone fucking sick of the fence sitting, spineless, tight-lipped masses.”

Fool’s Gold is most defined by its atmospheric melodies, rolling grooves, and dark, hypnotic vocals. The band describes the EP as a deep dive into the individual experience of being a human being. Thematically, these songs are stories of love, loss, secrets, pain, and growth, and it’s ultimately a very relatable record. Even though they, like every other musical act, were shut out of touring for over a year, Lyoness carried on with writing and recording, culminating in the band gathering at the new Marshall Recording Studio in Milton Keynes, England, at the end of the pandemic-related lockdown. Working at the studio made the band feel alive again, after being shut down after a very productive first ten months. Now they’re back in business and ready to hit the road. So who’s ready to rock? 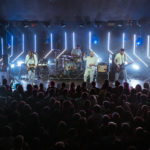 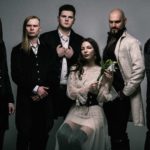 Track-by-Track: Saphath Summarize the Songs on ‘Ascension of the Dark Prophet’