David Maine, the dynamic artist behind Floated, releases “Sizzle” on April 14 in anticipation of his upcoming EP. Reminiscent of a hype track that would play in the background of a scene in the HBO show Euphoria, Maine hits on something imaginative and fun with his newest release. He explains that his initial intention was to create a song with a “lofi type beat,” but in the end, it morphed into a track with soft-spoken rap vocals and ethereal electronic stylings.

He shares that the spurt of creativity when making “Sizzle” led to the creation of his EP. Letting the inspiration come to him and taking advantage of the momentum, Maine reports that he wrote and recorded the entire project in a span of 48 hours. Being that Maine writes, records and produces all of his own music, this is no small feat.

Maine explains that the track was made in “an attempt to offer myself and the listener a 2-minute pause from thinking about all the hell that is currently ravaging the world” and just “massively let loose” instead. “Not all music needs to be deep,” he adds. Quirky in nature and massively addicting to listen to, Maine sings “all we gotta do is sizzle” with a vocal saunter that makes the track an instant party staple. As the first release off the EP, “Sizzle” is a promising introduction to what the rest of the record holds in store for listeners.

Floated is the Brooklyn, NY-based project of producer/songwriter David Maine, a 30-year-old lifelong musician. A classically trained pianist and multi-instrumentalist, Maine was previously the bass player for the “Indie Darlings” band Frankie Cosmos where he toured and recorded with the band for four years, often alongside his brother Aaron Maine (of Porches). Under the moniker ‘Floated’ Maine creates a sonic world full of ethereal synths over-driven drums where he shares highly personal lyrics. Floated has become an outlet for Maine to cultivate an imaginative and focused sonic world, capturing snapshots of his life in music and coloring them with inspirations spanning from vaporwave and escape room to grimy upbeat electronic RnB. His single “Daylight” was recently featured in Apple Music’s INDIY playlist, as well as in Acid Stag’s “New Comers” mixtape, and advances a self-titled EP that was written, produced, and recorded by Maine in New York. 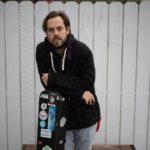 UnCovered: Just The Tim & Friends’ Tim Bernard on the ‘Fell Over You’ EP Artwork 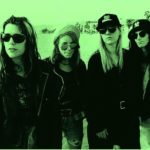