You know it’s just all going to be a good time when it comes to Just The Tim & Friends. The Chicago-based group recently released their new EP, Fell Over You, which includes the title track, a delicate, acoustic ballad anchored by frontman Tim Bernard’s profound vocals reflecting on his feelings over falling head over heels in love with a woman. It’s a dreamy take on classical Americana, with some folk elements that help make the song, and the band, extremely relatable.

Bernard formed Just The Tim & Friends last year during a group studio session. Since starting the project, Bernard has gone to specific lengths to not take it too seriously, relying on intuition and improvisation to create a welcoming sound influenced by classic rock, indie, and folk. You could liken their sound to the down-to-earth, singer-songwriter appeal of Neil Young or Tom Petty. Just The Tim & Friends are united by one overarching common goal as a collective: to emulate, through music, the feeling of being free, open, and fun.

For our latest edition of UnCovered, we recently spoke with Bernard and his wife Sam Aquino about the album cover for Fell Over You; discussing her role in the creative process, how Tim contributed, and the themes that inspired it.

Sam Aquino: “Just the Tim & Friends project and music reminded me of my solo trip to Iceland. I saw many horses on the side of the road as I was driving, and this reminded me of the free feeling I had while on this trip. I thought the horses were very peaceful and happy.”

Tell us more about your wife and how she came to be involved in the album’s artwork.

Tim Bernard: “She is a crazy talented artist and used to do flyers for my previous bands. She has done artwork for Just the Tim & Friends in the past, as well as my current rock band Mudflower.”

Aquino: “This was a digital drawing using Adobe Fresco on my iPad Pro. I wanted to do clean lines for this one because the air was very crisp when I saw these horses. It is easier to achieve clean, crisp lines in a digital format.”

What were the partnership’s dynamics like between yourself and your wife? For example, was a specific look given, or did she have full free range?

Bernard: “I did give some direction by letting my wife listen through the tunes and express how she felt while listening to them. This photo was one among many that she created. She immediately told me she wanted to do a horse. At first, I was skeptical, but when I saw the photo, I immediately saw what she was going for.”

Would you consider your wife more of an artistic collaborator at this point?

Bernard: “Yes, she is a wife, a band member, a friend, a manager, and all of the above.”

Did your wife hear the album beforehand? Or what kind of input did you give to her?

Bernard: “Yes, she listened to all of the songs and then considered what to create. I told her I wanted something free and open. Something relaxed and with a bit of an Americana vibe to it.

I’ve purchased many things simply because of the packaging and artwork. Usually, the music lives up to the art. One example is Pearl Jam’s Vs. album. That sheep putting its snout through the fence had so much raw attitude, and music was perfect for it.”

Bernard: “This day and age, we are flooded with content. In order to stand out, I feel the cover art must catch the eye and stop someone from scrolling. I know it happens to me that way. From there, the music must be good to back up the interesting imagery.”

Bernard: “I want them to draw no conclusions from the picture. If anything, I want them to wonder what this is about and then jump in to listen to the music.”

Bernard: “I was a big fan of Tool and the way they incorporated art and imagery in their music.”

Bernard: “Digital looks very clean and professional. At the same time, you can lose a bit of that human touch to it. Similar to autotune or electronic beats. They can be cool, but if used too much, you feel like you are listening to a robot.”

Bernard: “Sublime had that cool-looking sun. I always thought that translated well on stickers and t-shirts.” 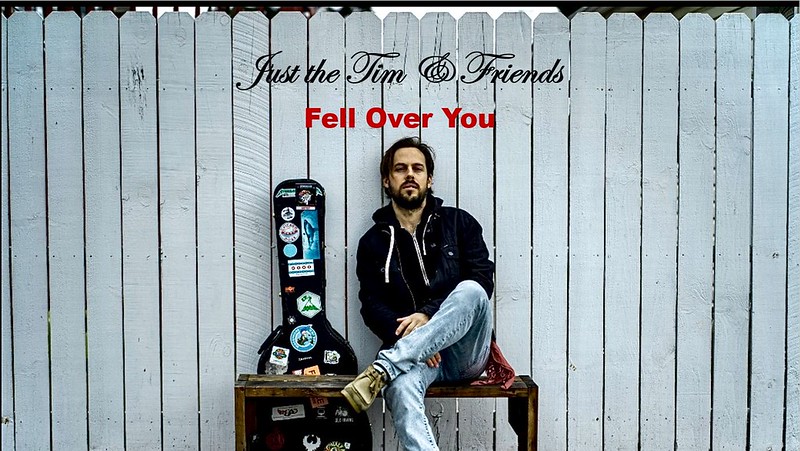 Bernard: “I would say both. I love having creative control, but I do let the input guide me. Sometimes I want to get out of my own way.”

Aquino: “Yes. The artwork was mostly inspired by the name of Just the Tim. The theme was exploration, peace, and finding your path all on your own.”

Bernard: “I hope the listener will be tempted to listen to each song in full. A bit like you would listen to music on a road trip. The fact that this photo was inspired by the artist taking a road trip in Iceland should help guide the listener to the appropriate mind space.”

Is the art for Fell Over You related to any of your previous album cover artwork?

Bernard: “This is my first album. But she did help me with my solo effort. I still use the fish bone artwork to this day.”

When it came time to come up with artwork, did you give your wife any guidance, or was this just a natural brainstorm?

Bernard: “This was a natural brainstorm. The artist already had the idea after taking the road trip.”

Bernard: “I like how simple it is. The art is left to the viewer to perceive what is happening and what it means. Yet, it is full of character and mood. The mood I feel from it is easy, open, and peaceful.”

Did your wife work on any art for the album besides the cover?

Bernard: “Yes, she has done quite a bit of artwork for the Just the Tim releases. In fact, the next single to (yet to have a release date) will be done by my wife as well.”

Bernard: “I used to love the Pearl Jam Ten cover. Something about it was very ‘80s bleeding into ‘90s and full of so much energy. They looked like a team ready to go to battle.” 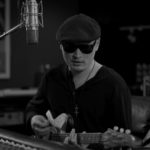 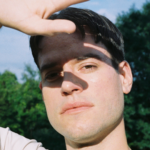