Desperate Measures have been making music since 1981, having formed in Christchurch, New Zealand with founding member Eugene Butcher still at the helm. Although the lineup has changed somewhat since the band’s inception, it is pretty strong in its current state. Joining Butcher is the former Glitterati and current Rich Ragany and the Digressions guitarist, Gaff, Ricky McGuire of UK Subs fame, and James Sherry of Done Lying Down on drums.

Rinsed is a mini-album of six tracks and it is short, sweet and calls back to the old days of punk – reminiscent of groups like the Sex Pistols. Simply put, each song is, for the most part, basic guitar riffs, thumping punk rock bass lines, and drum beats with gritty vocals at the centre. It really pays homage to past music that rarely gets much attention these days, despite the respect it garners.

Each track maintains the aforementioned style whilst still managing to hold its own identity. The main single of this release, “Flowers at Your Door,” is an exceptional combination of a more ‘technical’ style with a slower punk rock rhythm that stands it apart from the record’s other tunes, with Butcher showing an ever-so-slightly softer side whilst still keeping to the tone of the album overall.

Rinsed is a must for those yearning for a call back to the raw energy and rebellious nature of the early punk scenes of the ’70s and ’80s. Although there is nothing mind-blowing about this album, does there really need to be? Butcher and the rest of the bank know what they wanted to create, they know their fan base and, as a result, have written a short and effective record for those they aim to please. 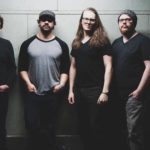