Given that we’re talking about Mayhem, one of the most controversial bands of all time, the reaction to a release like Atavistic Black Disorder / Kommando could go either way. On the one hand, if you’re an elitist black metal fan, this mix of covers and originals will probably leave you cold. However, if you’ve spent any time investigating the musical roots of the Norwegian outfit then this playlist should come as no surprise. Whether it is something you will listen to on a regular basis, however, is another story entirely.

You see, despite being one the blackest hearted bands in existence, Mayhem’s roots lie firmly in the punk scene and, by the punk scene, we’re talking pre-1987 punk rock, not the kind of chart-bothering gubbins that passes off as punk rock these days. First up, though, there are three tracks taken from 2019’s Daemon sessions which, predictably, are your more standard Mayhem fare. Blacker than tar, the three tunes are ferocious in delivery, exhibiting all the traits of good black metal. Buzzsaw guitars, a raw production, and Attila’s throaty screams pierce the air around you right from the moment “Voces Ab Alta” unleashes its hellish rage. Quality cuts, each of these scathing efforts will make a welcome addition to complete your collection while making you glad that you weren’t responsible for making the tough call to cut these three songs from the final Daemon track listing.

Onto the covers, the more controversial element of this EP. Of course, if you know your Mayhem history, you’ll know full well that the band has never hidden their punk rock roots. It should also come as no surprise to find them paying tribute to Dead Kennedys, Discharge, Ramones and Rudimentary Peni. Typically raw efforts packed with the kind of unbridled aggression that the punk sound built itself around, in a strange kind of way, you could argue that there isn’t a band more suited to covering punk rock than Mayhem? Of course, the elitist black metal army won’t see it like that but, for those of you of a more accepting nature, as your ears are given a going over by the then and now nature of the material, the whole thing will make a lot of sense. 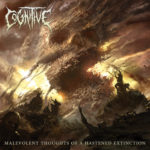 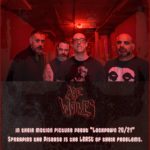