“It’s Been Awhile,” but how satisfying is it that Staind has made their long-awaited return? After a several-year hiatus, the genre-defining band is back, with their latest release, Live: It’s Been Awhile. The live album was recorded at the group’s big comeback show that took place in October 2019 at Foxwoods Resort Casino in Mashantucket, Connecticut. The concert was a celebration of the quartet’s return after a four-year hiatus, and the plan was for it to lead into an eventful 2020, filled with a lot of live shows. That is, until the pandemic cancelled all of those plans.

Live: It’s Been Awhile features many of Staind’s biggest hits, including songs from their smash-hit album Break The Cycle, which also happens to turn 20 this year. To celebrate that milestone, the band performed the record in its entirety on May 8th, the exact day it was released in 2001, for a special streaming show that took place in Holyoke, Massachusetts.

It’s refreshing and certainly exciting to see Staind back together again after so long away. Just this past week, a summer tour was announced with Korn that will begin in August! When offered the opportunity to talk to the group, we jumped at it and recently connected with founding guitarist Mike Mushok, in which we discussed the new live album, the band’s original plans before the pandemic, Break The Cycle’s 20 year anniversary, and Mushok’s other act, the well-regarded Saint Asonia.

As a fan of Staind, I can say that it’s a welcome return to see you back with the release of Live: It’s Been a While. What was the thought process behind releasing a live album right now?

Mike Mushok: “When we got back together to do some shows in the fall of 2019, we decided we wanted to film the show as we were using a bigger production than we had in the past. It made sense to film the two nights we were at Foxwoods Casino in Connecticut, as they are basically hometown shows. It was from that filming the idea of a live album came up. Since we captured the whole show, we decided to release the audio as an album as well.”

“I like that they capture a moment in time. They can hopefully capture the energy and excitement of what a live show is. For us, it’s also a collection of songs we felt we wanted to play that evening and what we thought worked well as a set for our hometown crowd that we hadn’t played for in quite some time.”

There are obviously some legendary live albums in the history of rock n’ roll, Frampton Comes Alive, The Song Remains The Same, The Who: Live at Leeds… What are some of your personal favourite live albums from over the years?

“I think my favourite is actually Elton John’s Live In Australia With The Melbourne Symphony. I just love that album. And for me it’s the collection of songs and capturing that moment. I also feel that Elton John has written some amazing songs. I could also take the polar opposite of that and say that the I really enjoy the Jay Z Unplugged album as well. Just great energy. I love a lot of the Unplugged albums.”

The band was on an extended hiatus until about two years ago when you announced you’d be playing some live shows in the fall of 2019. What precipitated you getting back together and wanting to go out and play together again?

“We spoke a lot over the years when we weren’t playing about doing gigs, but (frontman) Aaron (Lewis) was busy with his solo career and I was doing various projects. I think finally in 2019 we had some really good offers to do festivals and the casino shows, so it just seemed to come together to where we could actually go out and do some gigs again. I’m really glad it was able to happen.”

Did it ever feel to you like Staind would never play another show again? Or did you always expect to eventually reconvene and play together?

“I think I always expected we would play again. There’s too much history there to not… at least for me. It really was great to be back on the stage again as Staind and playing those songs. It felt great.”

I read that the shows you played towards the end of 2019 were a prelude to what was going to be an eventful 2020 for you, which the pandemic obviously didn’t allow to happen. Can you tell us what you originally had planned for last year?

“Sure, we had the tour with Disturbed planned. It was the 20th anniversary of their album, The Sickness being released. The tour originally got postponed and then eventually cancelled, which was too bad as I was really looking forward to playing with those guys. That was the main goal of 2020, to get that tour under our belt and work on new music as we also signed a new record deal in 2020.”

The track listing for Live: It’s Been a While obviously includes a lot of the band’s hits like “Outside,” “Fade,” and “Right Here,” but it also contains some more album-based tracks like “Paper Jesus,” and “Raw.” How did you decide on the track list? Was it difficult to come to an agreement on what songs to include?

“No, it wasn’t difficult. We went back and forth a bit but really just wanted to try and include a little bit of each stage of our career. And yes, you mentioned some of the songs that got a little more love at radio and we feel like there are some songs that you almost have to put in the set and that’s not a bad thing. I feel very fortunate that we have those songs and love playing them.”

What do you remember most fondly about this show in Mashantucket where you recorded the album?

“I remember being very happy that my family and friends were able to be there. It was really great to be able to play for the hometown crowd again after being away for so long. It felt awesome to be back up there playing those songs and I was really happy with the production of the show as well.”

It’s hard to believe that Break The Cycle came out 20 years ago this year. Now two decades later, how do you look back upon that album? How do you feel about it now in comparison to then?

“I’m very proud of that record and what it meant to the band’s career. We worked very hard touring on our first album, Dysfunction and really went right to work on Break The Cycle after a lot of touring. We kept on hearing how hard it is to follow up your first record, so I was a little nervous about that. Once we finally finished the album, I remember listening to it and feeling like we had accomplished what we set out to do, make the best record we could. I’m very thankful that it connected like it did as well. It was a great time in our career.”

This may be difficult to answer, but in hindsight, is there anything about Break The Cycle that you would have done differently in terms of the song writing, production, or the track listing?

“That is tough to answer. I guess for me, that album captures where we were as a band back then. I remember working very hard on it, the songs and the arrangements, and just trying to be the best we could. As I said earlier, I was very happy when we finished it, so in that sense, I don’t think I’d change it. Whatever changes I would want to make would be moving forward rather than looking back.”

All of this inevitably leads to one key question: what is next for Staind? Can you foresee recording maybe a song or two together, or even an EP or album?

“We will definitely be working on an album. Right now Aaron is finishing up a country record and after that is done, we’ll get to work on putting together a Staind album. There will also be some shows this year. We have a little run booked in July and then talking about some more shows later this year.”

Lastly, I wanted to quickly ask you about Saint Asonia since it’s obviously your other primary musical endeavour. It’s been a year and a half since Flawed Design was released. Are there any updates with regards to the band?

“I’ve been getting music from (lead singer) Adam (Gontier) and working on songs with him. It looks like we’re going to be recording an EP soon. No timeline, but should be fairly soon I’d imagine.” 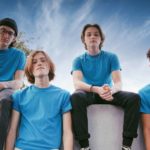 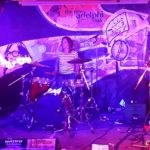