Sometimes you find the most perfection in what seems to be imperfection, and that’s certainly the case with these darlings of the underground, Les Bécasses. Champions of the French underground squat circuit, this is one rough and tumble trio, full of classic, ’70s punk appeal, when passion and attitude counted for everything.

Last month, on April 16th, the band released their new album Bloody Winter through Blang Records, a revitalization of that iconic classic punk sound. Despite being a Francophone band from Paris, each song is sung in English, led by the sharp, poppy appeal of lead vocalist and guitarist Marion. The record comes at an appropriate time, with its party time appeal fitting well with the changing of the seasons, and what is, hopefully, a concert-filled summer ahead. This all said, enjoy a free high-quality MP3 download of the group’s drop track, “Drifting Away.”

Describing the recording process for Bloody Winter, Marion said, “We recorded the album in two days with our friend Josh, who is a talented producer and also plays in Louis Lingg and the Bombs, and who was assisted by his friend Joseph, so cool too. We had seven songs to record in just two days, but it was a happy time! Eating on the sunny roof terrace and drinking beers. We shared our lunch with another band, Cerbere, recording their doom sludge style record but thanks to whom we had the chance to listen to the first Hole album again. An evidence that the same influences can generate very different music!”

Although it’s been out a month now, Bloody Winter will be receiving a special UK vinyl release on May 14th. Featuring eight songs, the album is the perfect listen for the punk rock enthusiast, the ones who hold The Ramones, The 5.6.7.8’s, and Les Wampas in the highest regard. It all comes at you fast and furiously, with the record clocking in at a fierce 20 minutes, the type of work that leaves you wanting more.

The band members decided to title the album Bloody Winter for a very special reason. Back last fall, they could already tell that the coming winter was going to be rough. Drummer Aurelie works as a nurse in a Paris hospital and bassist Christophe works with homeless people. Both were seeing the direct effects of the COVID-19 pandemic, so it just made sense to acknowledge the realities of a very difficult period in modern human history. With the cruel winter behind us, let us look forward to that summer of sun, fun, and electric guitars. 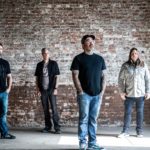 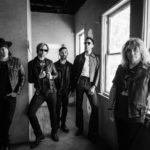