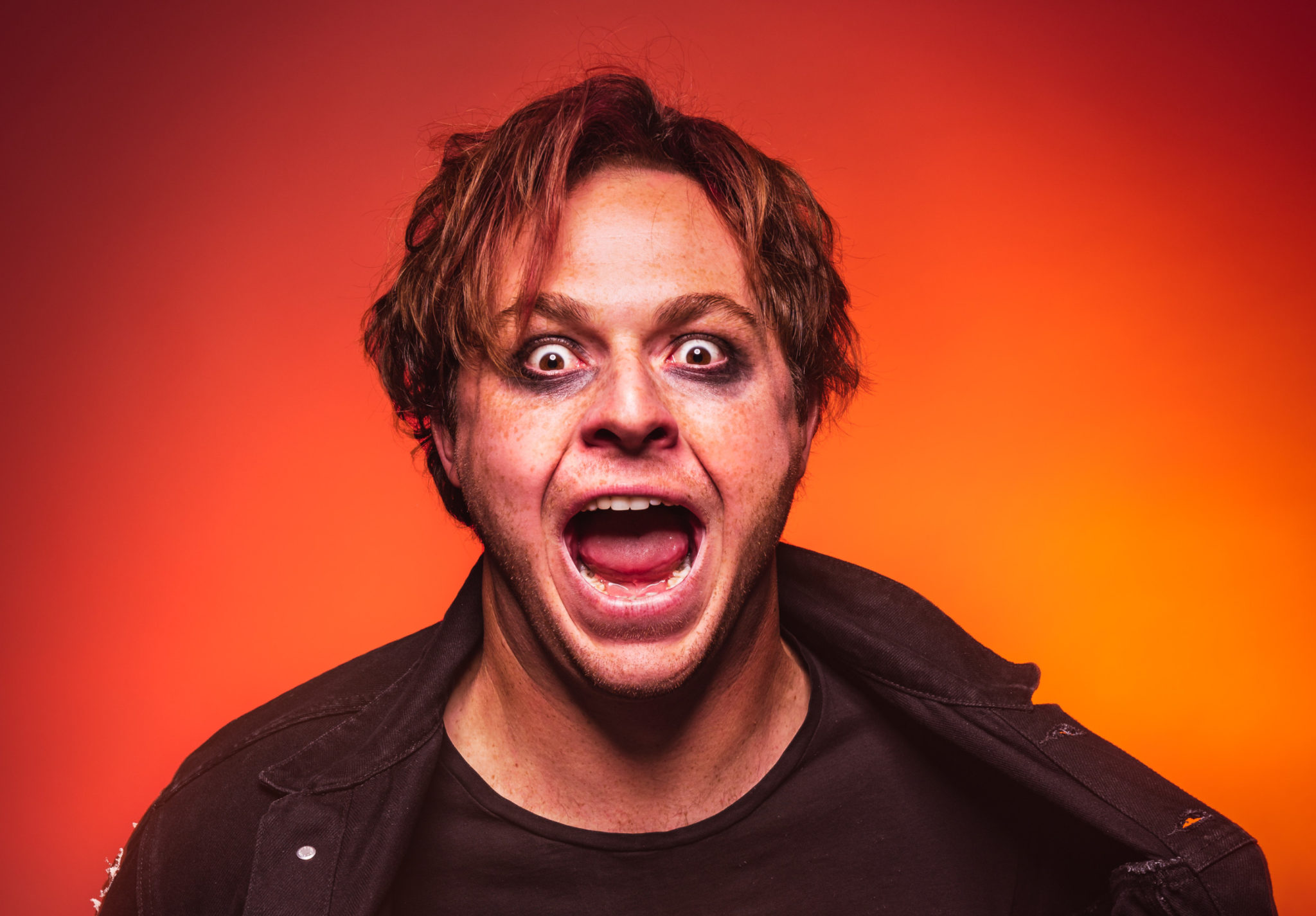 Soundhoose are taking out all of their frustration with their upcoming record, Quarantine Psycho, set for release on April 16th. We recently helped spread the word about the album, and the band’s recently released single “Psycho,” and we were pleased to reconnect with them again for our latest Purely Provocative interview. The band is at their disaffected best on the new album, cranking out rebellious anthems, refusing to shy away from tough topics related to the current state of affairs the world finds itself in.

Formed in 2018 in Minneapolis by singer and songwriter Brandon Smith, the band now currently operates out of his hometown of Los Angeles, where he has hooked up with the very capable rhythm section of bassist Erik Netland and drummer Paul Burns. A full-on rock n’ roll assault, Soundhoose has no time or patience for classifications, inspired by the spectrum of rock. Some of their more notable influences include Green Day, Linkin Park, Yungblud, Rise Against, Muse, and My Chemical Romance.

With Quarantine Psycho finally arriving next week, it felt like the perfect time to connect with the band for a new edition of Purely Provocative, where we discussed, let’s just say, the raunchier side of life.

Brandon Smith: “Fourth inning in a bathroom of a Minnesota Twins game or at a train stop in Government Plaza.”

Erik Netland: “I’ve only puked twice since third grade. Got a concussion at 3 am in 2018. And then when I had COVID-19 last year.”

Paul Burns: “I puked drinking way too much whiskey at my house which was a kickback and fell face forward on my own puke.”

Smith: “Side of the freeway… Mr. Bad Luck made an appearance.”

Netland: “Campground outhouse. No plumbing, just a hole in the ground.”

Burns: “Next to a tree at Yosemite Nature Campground.”

Have you ever tasted someone else’s blood; when, how who?

Burns: “My ex when she sliced her finger by accident while cooking food.” 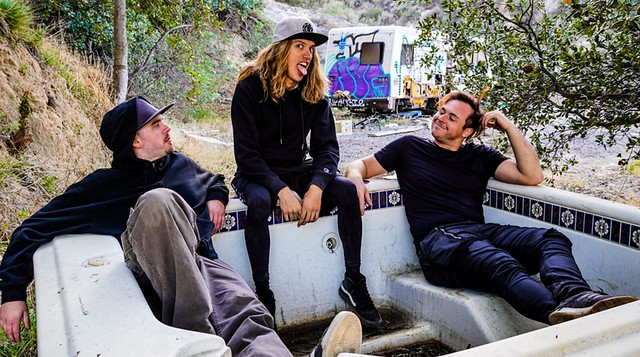 Ever intentionally spit on fans?

Smith: “Would never do that.”

Netland: “My ceiling fan once. It came back in my face. Fans in the audience, never.”

Grossest chick you’ve ever hooked up with?

Smith: “I don’t remember the name and I’m glad I don’t. I was doing my roommate a favour while he was with the better-looking friend.”

Netland: “Some drunk chick at a bar who later threatened to rape me.”

Burns: “Some Asian chick at some small party over in Tarzana.”

Sonic Diarrhea – frustrating or fun? How are the shits while touring?

Netland: “Always makes me feel lighter once I explode a load.”

Burns: “They can be fun at times.”

Most times you’ve had sex in one sitting?

Burns: “The night I saw Deadpool which was like three times including at the movie theatres.”

Smith: “Texting and driving on the way to a roller hockey tournament. Won’t do that again.”

Netland: “Choking on shrimp. Also, I was sick with strep throat and mono, lost my voice, couldn’t swallow, struggled to breathe. Worst I’ve ever been sick and I thought I wasn’t going to wake up in the morning.”

Burns: “I ate an edible that was too much for my body to handle and literally thought I was going to be rushed to the hospital.”

If you could choose, how would you die?

Smith: “Quick and painless doing something like skydiving or in my sleep.”

Has a fan ever really pissed you off? What happened?

Smith: “Yes, Erik’s ceiling fan. In the fan’s defense, Erik had it coming.”

Do you bathe on tour? Is it regular? Do you take what you can get and do a wet nap wipe if there’s no shower?

Smith: “Yes, yes, and no. If there’s no shower, Erik and Paul are fucked.”

Netland: “Haven’t toured yet so we shall see.”

Smith: “My hard drive fell out of my bag and got ran over. It had all the sessions from the album I was making on it and I had to re-record and mix everything.”

Netland: “Having a girl threaten to rape me.”

Burns: “I forgot my sticks and hi hat cymbal at home right before I’m about to perform.”

If someone stole all your band’s gear, then you caught the dickwad and no one would ever know what happened next, what would you do to him?

Smith: “I pray this never happens because I honestly don’t know and I don’t wish that fury on my worst enemy.”

Netland: “I’ll tell you if it happens.”

Burns: “I will demand an apology and settle it like men by having a drink together.”

Netland: “Losing control of myself because I don’t know what will happen and who might get hurt.”

Burns: “I agree with Brandon’s answer, snakes terrify me.”

Smith: “Return it to them or the police. I have enough bad karma already.”

Netland: “Return it to them.”

Smith: “No. I definitely don’t want to play completely sober, but the fans deserve a great show and a little alcohol definitely helps loosen me up.”

Netland: “Never drink before performing or practicing. Alcohol puts me to sleep.”

Burns: “I have, it wasn’t the best decision.”

Your instrument/gear (drums, guitar, etc.) has a catastrophic failure on-stage and you have no backup. What do you do?

Smith: “This would never happen to me (laughs). I’ve got backups of everything, but I’d probably borrow a piece of gear from one of the other bands or try to improvise with backing tracks or other instruments.”

Netland: “Already had issues with one bass. Thankfully another bassist let me borrow his to finish the set.”

Name some of your biggest pet peeves. You know… that ones that make you want to wreck shit!

Smith: “Politicians, being late, lying, flaking, stupidity/lack of common fucking sense, trying to change other people’s opinions, and oh my god, I fucking hate automated services when you call somewhere and have to deal with talking to a damn machine.”

Burns: “I’d probably have to say flakes and people without ambition/goals.”

Smith: “Rob a bank? I’m not sure but endless money wouldn’t be the worst thing in the world.”

Netland: “With zero repercussions I would steal wealth, assets, and property from the government, from the wealthiest elites (Bezos, Zuckerberg, Gates).”

If you weren’t a musician or totally in love with your job, you’d be…

Smith: “Something to do with hockey at a high level. I played competitively for years.”

You kick everyone out of the band because you can replace them with any musician you want. Dead or alive, who do you recruit?

How often have you/do you pirate music? What about movies and TV shows?

Smith: “I used Limewire when I was in middle school. I don’t do it anymore out of respect for my fellow musicians.”

Netland: “Nope. I buy all my music on CD, all my movies and tv shows on DVD. No streaming. No piracy.”

Smith: “Hate the smell of it and I don’t personally do it, but I’m all for doing whatever you want as long as it makes you happy and doesn’t negatively impact others.”

Netland: “I don’t use. My body, my choice. What I can say is, it’s hard to work with coworkers or supervisors who are high, and it’s hard to deal with customers who are high. Nothing gets done. It’s funny how they think they’re productive.”

Burns: “I absolutely love it.”

Describe when and how you lost your virginity.

Smith: “After a hockey game. I scored the game-winning goal and a friend from school invited me over after. It didn’t last long. Sorry, Taylor!”

Netland: “Not sure how I lost it but I found it so I can sleep well at night again.”

Burns: “One year anniversary with my ex.”

Does God exist – why yes/no/who the fuck cares?

Smith: “Yes, absolutely. There’s too much beauty out there to think it just magically happened in my opinion.”

Tell us about the worst lie you ever told someone.

Groupies. Totally awesome, want to bang them all. What the hell is a groupie? Give us the scoop!

Smith: “I don’t know about groupies, but I love guppies. Plenty of them in the sea!”

Smith: “When I found out I was allowed to come home again after being on probation.”

Netland: “I’m a huge college basketball fan. Two days ago I was watching highlights of the March Madness tournament and I got emotional. It’s so amazing! Buzzer beaters, dunks, the emotion, and excitement.”

Burns: “When my grandfather passed away last year in March.”

Who is the biggest asshole you ever met and why?

Smith: “My ex’s best friend’s boyfriend. He was a manipulative asshole who treated her like shit and no one deserves that. He’s impossible to have a conversation with and toots his own horn waaaaay too much.”

Netland: “Working customer service you meet a lot. Don’t know their names. Can’t single one out right now. But the biggest that I haven’t personally met? Gavin Newsom. Anyone in government actually.”

Burns: “It’s hard to say, there’s a lot of assholes in this world.”

Smith: “Molly with my girlfriend at the time. We were camping and the whole experience was so peaceful and incredible.”

Netland: “I accidentally took cough syrup after I had Prozac. I do not recommend.”

Burns: “Only drugs I’ve taken is weed and alcohol. So I’d probably say when I had too much of both which usually happens when I’m at some sort of gathering.”

What’s the creepiest thing a fan has ever done to you/creepiest encounter with a fan?

Smith: “She asked for a water bottle I drank out of so she could ‘replicate my DNA.’ She may still have it, I don’t know.”

Netland: “Again, when the girl threatened to rape me.”

Smith: “With all the corruption that goes on, I wouldn’t be surprised.”

Netland: “I’ve actually been seeing evidence that it was. Planned out. More evidence may be coming out soon.”