Wardruna, the Nordic folk sensation, have just released Kvitravn, their fifth full-length album, the follow up to their 2018 acoustic live album, Skald. Nearly 20 years into their existence, the album represents a new beginning for the band. Originally scheduled for last June, the album was unfortunately delayed until January 22nd due to the COVID-19 pandemic. With this sparkling new album now with us, we were fortunate enough to grab the attention of founder, multi-instrumentalist and ever-humble frontman Einar Selvik to ask him a few questions about all things Wardruna.

First there was the runic trilogy. Then, the ‘live record,’ and now there is Kvitravn, the first stand-alone Wardruna album. Are there any plans for things to come, possibly more wide concepts spanning multiple releases, or will you be sticking to individual narratives for now?

Einar Selvik: “I don’t know. I like telling stories that span over many, many different songs or works, and even in this album, I do refer to things that you hear even within the music, refer to things that you… that have been presented in earlier works. But… I haven’t really, like, decided if there is going to be like a clear sort of binding from this towards the next, but that might very well happen. But, yeah, not something I’ve fully decided. What is for sure is that they will continue to sort of belong together, in any case.”

Good to know! Then the word Wardruna. It implies guardianship as a responsibility that you’ve taken on for such a large piece of Nordic history. Is this a heavy burden for you or more of a pleasure?

“No, that’s just something that comes naturally and I don’t even know if the name is an accurate sort of statement within it, it’s not something I… well, I don’t look upon myself as the guardian of runes or the guardian of this old knowledge, necessarily. Even though we are doing work that in many ways could be described as such, I think when things come from a natural place… it’s sort of an honest and wholesome desire to just do it, to give voice to these things or do what we do. I don’t think it makes any sense that I should see it as a burden in any way.

In the same way, when I create my music, I’m not thinking about you guys or my audience at all; I’m creating the stuff that I want to hear and that I want to give voice to, in a way. And what comes after that? This is in many ways out of my hands. So it’s like we’re just going to continue to do what we’re doing, I guess. And of course, we are going to do it with a smile and not feeling like it’s inflicting any burdens onto us.”

Ok, wonderful. In terms of the creative process, apart from the very obvious themes of nature and of history, what really influences and inspires you?

“Well, of course, the inspiration can come from many different places, but of course nature is a central part of it as it is a central part of Wardruna. And, well, not only nature, but also human nature and philosophy. And yeah, many parts of the old traditions, mainly focusing on the ones that, of course, resonate still and carry relevance still. But, you know, inspiration, that sometimes it’s a sonic thing. You know, it can be like an instrument that evokes an inspiration or it can be poetry that comes, that sort of thing. And, you know, I do a lot of my writing when I’m out walking, that’s sort of my main muse, one can say.

“Of course, for me, a lot of these ancient myths can be certain traditions, but when regarding myths and legends, I mean, there is always an element of truth in it in a way. And for me, it’s not only or it’s not about just reciting them or giving voice to them as they are or as they are represented, it’s also important to dive into it and understand and dig deeper into why it matters and what it is actually telling us and how it might apply today. And, of course, by doing that or by sort of stepping into these different subjects with both feet in the way I do. When you sort of take in this information and you don’t only recite it, I try to make it my own in a way, and sort of convey it as knowledge that I understand, and own in a way.

“So that’s kind of how we want to tell these stories: as something for the here and now, even though they hail from a time that is very distant. Yeah, I think the fact that… I guess this album more directly speaks to us here and now, I would say, or aims to speak with us, as you’re hearing now more in the contemporary? So, yeah, it feels slightly more direct.”

Alright, I was actually very lucky enough to attend one of your recent live sessions (read our review) that you had with Alexander Milas hosting – one of the pre album release sessions, and the stripped-down, solo skaldic performance that you gave was really moving.

I was wondering if you ever considered doing another run of live shows in this format rather than with the full Wardruna Ensemble?

“I do that, quite a bit, and also, I guess, that whole solo project started out with me doing more like where I did workshops or even lectures about my work and approach to my music and historical music, etc. Like, the themes I’m working with, the response became more and more positive. And so after that, I started to do solo concerts, which is in many ways solo concert slash, I don’t know, conversation, I would say, where it’s about creating this context, because, well, in a Wardruna show there isn’t a lot of talk in between. And, you know, you only get presented the music. You don’t get this glimpse into the thoughts behind it. And of course, this allows me to do just that, to sort of create the context before performing the song, which I enjoy. Very much so.

Doing concerts in that format is something I very much enjoy. And it’s sort of a very… well, it keeps me on my toes, it challenges me in a different way than the normal Wardruna concert. So it sort of gives a very good contrast in many ways. And it’s definitely something I will continue to do more of in the future as well. Once the world goes back to normal.”

There is that. On the subject of your live ensemble, who makes all of your musical instruments?

“Well, at this point, I have a handful of people who will make my instruments and some of the other musicians’ instruments as well. Of course, in the beginning when I started out working with this project almost 20 years ago, there wasn’t a lot of information or interest around me. And of course, there weren’t a lot of people who knew how to build them. So in some cases, I was basically forced to either build it myself or have someone build it for me. And I guess I did both. So some of the instruments I use are self-made, but these days it’s a bit more convenient because, of course, this interest around the Norse culture, but also all of these ancient instruments, that has kind of exploded the last five to ten years.

So now it’s, of course, more convenient and easier to have a professional builder do it for me. So at this point I have like a handful of people that I normally go to when I want a new instrument.”

I have two more questions, because, as I said, I don’t want to keep you for too long. One is actually a fashion related question because personally, I love the clothing you wear in both your music videos and your live performances. But I wanted to know if you’ve ever considered doing a Wardruna fashion brand rather than just the standard music merchandise like t-shirts and hoodies and all that.

“Well, judging from the massive response and the amount of comments that say the exact same thing as you do, that there is a huge interest for it, then. For this kind of clothing that is sort of inspired by the past but has a sort of a modern feel to it as well, this bridge. Well, of course, it’s something I’ve been thinking about, but it’s not an easy thing either, you know, it’s quite a bit of a process. And if I were to do something like that at some point, I would really want to do it properly. And yeah, present proper craftsmanship, which is important, I think, in all parts of this project. I wanted there to be a certain level of quality. So if time allows at some point, yeah, that might be a possibility of doing some form of clothing line as well. Inspired by these things.”

As well as that and thinking of the future, you’ve already done television soundtracks. You’ve done a triple-A video game soundtrack. Are there other outlets or partnerships that you see in your future or that you are hoping will happen?

“Well, you never know, but what I do see is that by… I think by being very selective, that’s something I’ve been from the from the get go, whether or not it’s who we work with or where we do our concerts or… it’s been a long process. It’s basically saying 70 percent ‘No.’ And I like being patient, being true to the art and truth, to the core concept of Wardruna. What I see in retrospect is that by doing that, that is when these right or correct doors potentially open. And so I think we’re just going to continue doing what we do. And I am quite sure that there will be interesting doors and opportunities in the future as well. Or at least I hope so.

I like to well, repeating myself is not something I very much enjoy doing within my art especially and soul: going into things that challenge me to step up or grow or go out of my comfort zone… I think that’s a very healthy thing. That’s what makes you grow as a composer and as a human. I guess so, yeah. Who knows what the future will bring, hopefully something good.”

Well if the history is anything to go by, I’m pretty sure it will be good. I’ve reached the end of my allotted time slot with you, according to what has been sent out by the label, so I’ve got to say thank you so much once again, it’s been an absolute pleasure.

“Yeah, thank you. Thank you for the talk and likewise.”

And I look forward to everything that comes in times to come.

“Yeah, let’s hope the world finds its balance again. And so we can go about visiting people again and performing and so on. That would be most welcome.”

“Alright, well, you have a great, great evening.”

And you as well. 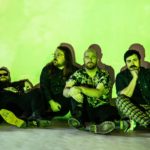