Founded in 2013 by David Lowy, The Dead Daisies could be considered the very definition of a “supergroup0 given the extensive list of collective members that have contributed over the years. Contributors have included members of bands such as Guns N’ Roses, Thin Lizzy and Whitesnake, just to name a few, and with Glenn Hughes, of Deep Purple and Black Sabbath fame taking the helm for Holy Ground, the bar was set very high for this record. Joining Lowy and Hughes on this outing are Doug Aldrich (Whitesnake, Dio) on guitar and Deen Castronovo (Bad English, Journey) on drums making this lineup as strong as ever.

Given the musicians involved in this band, it was not surprising that the music invokes the very essence of the ‘70s and ‘80s, eras that the world seems to find hard to let go of given the nostalgia that is drawn from shows like Stranger Things and, although set in the present day, Cobra Kai (more so the ‘80s with these shows). Still, just listening to the opening track “Holy Ground (Shake the Memory)” I can envisage the impressive fight scenes of the latter-mentioned show being exhausted to this very song! It is a strong start and the momentum of the following tracks keeps to the feeling that Holy Ground is the perfect soundtrack to times past, but never forgotten.

“Like No Other (Bassline)” has a brief chilled bass intro before ramping up the energy to a full-on riff-heavy, headbanging masterpiece. The entire album is stacked to the rafters with tunes that make me yearn for the return of the live concert so I can, once again, truly feel the music in the way only live shows can accomplish. There are, of course, tunes that do stand out from the crowd that I can only hope will become mainstays during the aforementioned live shows such as; “My Fate,” “30 Days in the Hole,” the ballad that is “Far Away,” the requisite song that entices the age-old need to spark a lighter and raise it high (although I do concede that this has evolved into mobile phone touches).

With the combined musical talents of Lowy, Hughes, Aldrich and Castronovo, Holy Ground has truly met the high expectations I had given the calibre of the artists involved. 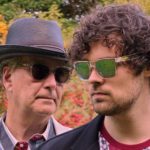