We’ve all tried different things to keep busy and sane during the COVID-19 lockdowns. From cookery and DIY to fitness programs and online pub quizzes, lockdowns have brought out the creative spark in many of us. One person, Pacific Northwest multi-instrumentalist, Steve Hall, used his time and went full quarantine karaoke, learning all of the instrumental and vocals parts to Temple of the Dog’s classic “Hunger Strike.”

However, while for most of us, our crazy lockdown ideas go no further than the four walls, Hall soon found himself not only an internet sensation but also being brought to the attention of Pearl Jam guitarist Mike McCready who gave the Pearl Jam and Soundgarden fan a shoutout on Twitter. One of the more bizarre success stories to come out of lockdown, there was no way we were going to pass up the opportunity to grill Steve about the project, his newfound popularity, and, of course, that superfan shoutout.

Thanks for your time Steve, how is life with you today?

Steve Hall: “Things are great. Kids are adjusting to virtual school and everyone is healthy so we are thankful for that.”

You’ve certainly been keeping yourself busy during quarantine. How did the original idea to do a one-man cover come about?

“I had seen all of these quarantine performances of band members playing from multiple locations that I thought were cool (particularly Barracuda with Nancy Wilson, Taylor Hawkins and Nuno Bettencourt). I wanted to do something like that but a. I don’t have a band and b. I didn’t want to impose any of my music friends with my crazy idea so by only having myself involved, if it ended up being terrible, I wouldn’t feel like I wasted anyone else’s time.”

Playing every instrument yourself must have kept you busy, how do you feel it helped you cope with the situation?

“I really enjoyed playing all the instruments. The guitar and bass come pretty naturally for me, but I really had to work the drums and vocals to get to a point that I was happy with so it was a big challenge and a fun distraction.”

And it gained you notoriety with not only music fans but a certain member of Pearl Jam. A nice reward for something that you started to pass the time?

“I was blown away to have found out that Mike McCready not only listened to the tune but gave it a shoutout on Twitter. Had I ever thought this would be seen by any of the original band members, I probably would have chickened out and not pursued it. I’m glad I was blissfully naïve on that front.”

Have thoughts turned to taking on any more covers or in fact, any other projects to pass the time during lockdown?

“For sure! Having thousands of people actually watch something you created is definitely motivating so I have been practicing more than ever. My first instrument is really the piano, so hopefully, I’ll put out something that features some piano playing. Maybe Elton John if I can pull off the vocals.”

You’ve said you’re a big fan of Pearl Jam and Soundgarden. Do you remember what turned you on to those bands?

“I was in college at the time and I feel like both bands pioneered a melodic intensity that was very powerful and different at the time. There was a soulfulness and drive in the vocals and the underlying groove of the songs that was lacking in a lot of the more mainstream rock I had grown up with through the ‘80s.”

Other than those bands, do you remember which album or artist it was that really had an impact on your life as a new music fan?

“Since I really got hooked as a young guitar player, it was Eddie Van Halen and Randy Rhoads that most influenced me. Van Halen I for sure and Blizzard of Ozz were the two albums that I was obsessed with in my early teens.”

Going back to the cover, what was the most challenging aspect of the project and what did you learn from doing it?

“For sure the most challenging part was getting the mix right. I really wanted to use this project as a catalyst to learn to use Logic Pro and hone my mixing skills and fortunately I got to learn a lot from my brother on that part who is a real pro. There is an incredible art to understanding the ins and outs of EQ, tone, and effects and getting each track to tastefully sit well in the mix. It makes a massive difference in the end result.”

With a wife and kids to keep you busy during quarantine, what else have you been doing to pass the time?

“I am the house cook so I spend a lot of time in the kitchen. And I’m also involved in producing several film projects so I have enjoyed working with the teams through the unique challenges of editing and completing a film remotely during a pandemic.”

Your brother helped put the polish on the end product. Do you remember what you felt like when you heard the end result?

“While I am definitely my biggest critic, there was a moment when we were close to the finish line that I paused and felt real excitement that this objectively sounded really, really good, something I could be proud of. Of course, I never thought more than a handful of Facebook friends would ever see it at the time.”

We’ve talked about Mike from Pearl Jam praising the song and your love of PJ and Soundgarden. If you could jam with either band on one of their songs, which song would you pick and why?

“That’s almost impossible to choose! I’d probably say ‘Porch’ by Pearl Jam. It has such a climactic chorus but also some great moments for rippin’ guitar solos.”

And what is next for Steve Hall?

“More music for sure. There is a lifetime of learning to do in music so I am constantly pushing to get better and learn more. I’m also excited to do some live performances locally and maybe will put a small band together for a few shows in 2021 just for fun.”

Thanks for your time Steve and good luck. Just to finish, how would you sum up 2020 and what are your hopes for 2021?

“While we have all had many challenges in 2020, I’ve been lucky to embrace the silver lining of more family time and the surprising discovery of new pursuits that I absolutely will continue to embrace in 2021 and beyond.” 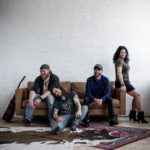 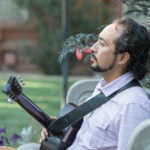