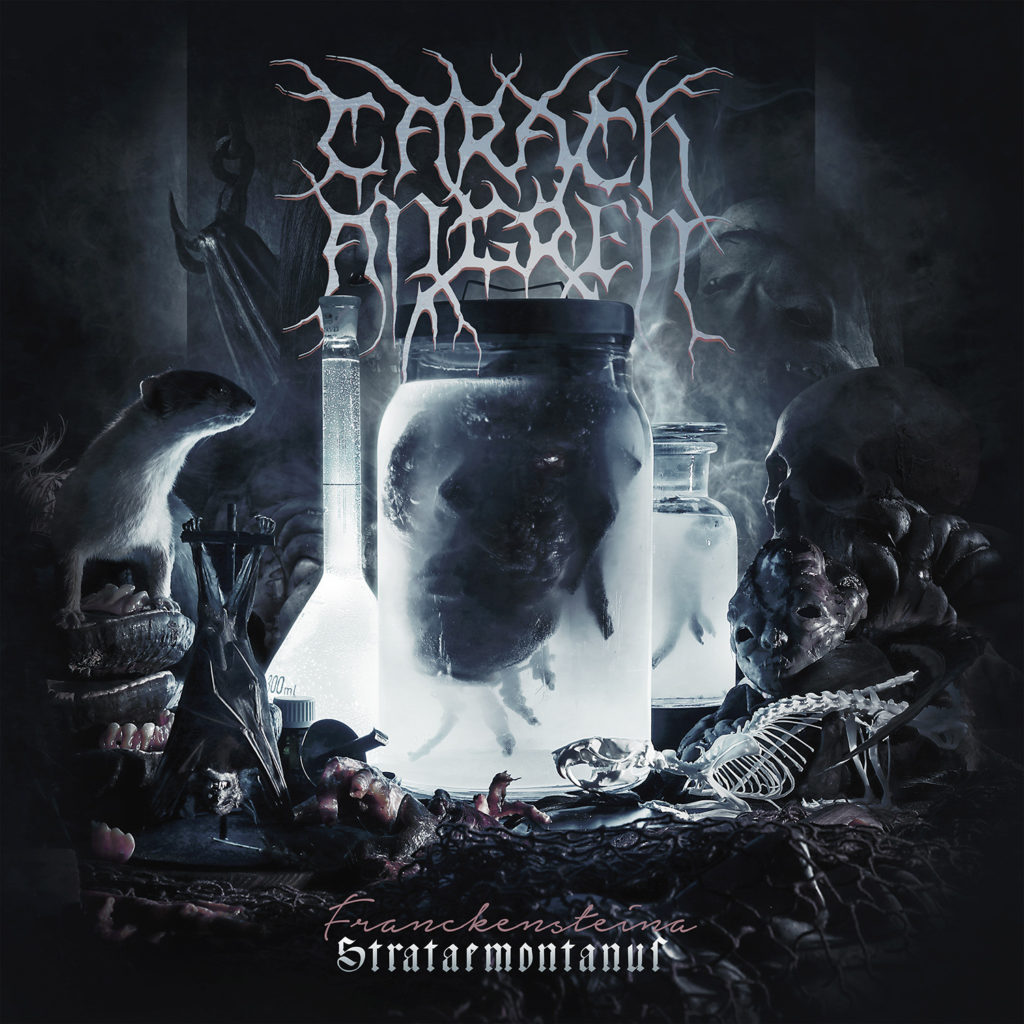 Franckensteina Strataemontanus, Carach Angren’s sixth full-length album, is an exciting new chapter for the band, and the music is likely to garner a fresh, expanded audience for the Dutch group’s signature blend of blackened metal with melodramatic theatre structures.

There are three characteristics that define the album, and the first is narrative. Carach Angren have always been storytellers more than songwriters, and this latest nightmare vision is no different: a string of tales designed to inform as much as terrify, all set to sweeping, cinematic scores making for an end result that is as much musical theatre as it is contemporary performance art. The album as a whole follows the cycle of death and rebirth in nature (as noted in this interview with frontman Seregor) – echoing this in the cyclical method of the narrative, too, where the introductory story of a youth at play (“Here in German Woodland” and “Scourged Ghoul Undead”) leads by twists and turns to a foreshadowing, of history repeating itself with some parasitic supernatural stalker preying on another youth similarly engaged in the album closer, “Like A Conscious Parasite I Roam.”

The style crafted on “Monster” can best be described as ‘grown up goth’, with its wide array of horror movie clichés.

The second obvious characteristic of Franckensteina Strataemontanus is the flirtation with electronics. Ardek’s extraordinary skill behind the keyboard has always been a hallmark of Carach Angren’s predominantly orchestral sound (gorgeously recaptured on “Skull with a Forked Tongue,” the most typical Carach Angren offering on the album) but his recent exposure to the world of industrial music (most famously his collaboration with Till Lindemann and Peter Tägtren’s side project, Lindemann) has inveigled itself into the compositional process, and songs including the title track, “Monster” and “Frederick’s Experiments” all showcase this. While adopting a more industrial sound is nothing new in black metal – from the sample-laden, martial stomp of Dimmu Borgir’s “Puritania” to Beherit’s 1995 synth masterpiece Electric Doom Synthesis and the entire discography of Mysticum – Carach Angren successfully assimilates this new direction and emerge stronger for it on the other side, adding a whole new facet to the already-complex sonic arsenal.

The third and last characteristic that really stands out on the record is its accessibility. Even though Carach Angren has long since left the black metal moniker behind, favouring the horror metal route instead, Franckensteina Strataemontanus is truly an album for all metal fans: trve kvlt die-hards may scoff at the softer side exposed by the band, but there is definitely something for everyone else to enjoy. Namtar’s crisp drumming (sadly a thing of the past as he left the group after the recording was completed, but his shoes are being well-filled by God Dethroned’s Michiel van der Plicht) is not only machine-like in its perfection, it’s heavy enough to satisfy the most mosh-crazed grind fans (“The Necromancer”) but delicate enough to raise eyebrows amongst the prog crowd, too (“Like a Conscious Parasite I Roam”). The rich variety of sounds and the epic scale of Ardek’s orchestrations (“Sewn for Solitude”) are more than a match for any other power ballads today, and the whole is tied up so neatly with dark, dirty carnivalesque arrangements that any fan of typical metal themes will smile.

“Der Vampir von Nürnberg” is a highlight in terms of Seregor’s elocution, but is also a great teaser for the album as a whole, as it echoes the cyclical theme of the record, just on a smaller scale.

Overall, despite the delay in release, Franckensteina Strataemontanus is (aptly enough) a monster of a record. Clocking in at just shy of an hour, there are no dull spots: pacing, dynamics, moods and atmospheres are engaging throughout – and believable, too! Hints of claustrophobia, paranoia and dread are liberally sprinkled throughout, but in support of the music itself, not as byproducts; for example, the rushed freneticism of “Frederick’s Experiments” on top of the thick bassoon introduction is a perfect evocation of lunacy and ‘mad scientist’ experimentation. That intelligent composition is also particularly noticeable in the unexpected waltz time signature on the World War II-themed “Operation Compass.”

In summation, there really is just too much happening on Franckensteina Strataemontanus to fit into one review: Seregor’s articulate and varied vocal performances are his best yet, Ardek’s arrangements are his most ambitious and the supporting ‘metal’ aspects – lifted bass presence, heavier guitars and, of course, the remarkably technical drums – are in no way muted in the mix. Overall, Carach Angren has truly taken ownership of their signature sound on Franckensteina Strataemontanus and in doing so, elevated it. As a result, no band sounds like Carach Angren, and that in and of itself is an impressive achievement.

As well as a pleasant reminder of the 2012 Where the Corpses Sink Forever album, “Operation Compass” is a very mature expression of Carach Angren’s sound.